March 11, 2014 By Fleur in her World in Book Reports, Fictional, it has intrigue, mystery and suspense, it holds stories of the past Tags: Sophia Tobin 9 Comments

On a cold wintery night in 1792 a night watchman was walking the streets of central London. He was employed by the wealthy to watch over their homes, and to protect them from the dangers – some real and some imaginary – that the dark night held. As I followed him, as I was shown the things that he saw, I knew that he was going to find something, and he did.

He found a silversmith – Pierre Renard – lying dead, because his throat had been cut from ear to ear. 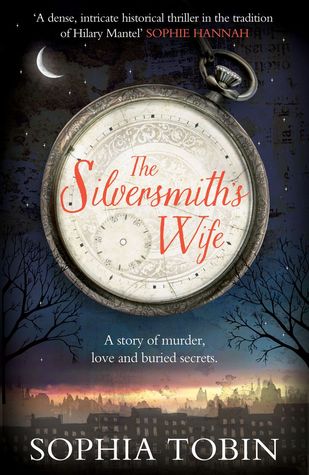 It was a dramatic and atmospheric opening, and the story had great promise.

Pierre was a successful businessman, but he was a cruel and bitter man, who treated the wife he had married for the wrong reasons horribly, who gave no credit to the other silversmiths who worked for him, and who desperately wanted something he could not have. His story – the story of what had made him the man that was – was told in diary entries at the start of each chapter. And it was intriguing.

They were all very well drawn and they had real depth. I believed in these people, and I cared about what happened to them.  I loved the way the story linked them, the way it became clear that they all had secrets, and the way that those secrets were eventually revealed.

It was lovely spending time with them, being able to step into a world that was so very well evoked, but I’m afraid there were times when my attention wandered, and I was aware that the central mystery, the question of who killed the silversmith wasn’t really being addressed.

The story lacked impetus, and when the truth was revealed it didn’t really come out of what had happened before.

And that was maddening because, though I found much to love, I had to put the book down thinking that it could have been so much better.