That’s the sum of this month’s book shopping – it was an exceptionally good month.

This may be a long post, but I resolved to record all of my purchases this year. 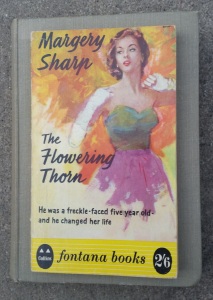 These were ‘library building’ purchases. I have a dozen or so authors whose books I am gradually collecting as and when affordable copies appear.

I knew that I wouldn’t be able to give back the library’s copy of The Flowering Thorn back until I had a copy to keep – that’s always the way with Margery Sharp – and I spotted a Fontana edition that was if not cheap then at least much less expensive than many. I do like Fontana paperbacks, but I have to say that in this instance the image and the tagline suggest that the artist and the writer haven’t read the books.

And the rather nondescript book that one is resting on is an first edition of ‘Return I Dare Not’ by Margaret Kennedy!

The next round of shopping was not at my expense – because I won £50 of books from Harper Collins! At first I was overwhelmed by the choice, but when I saw Vintage on the list of imprints my path became clear. 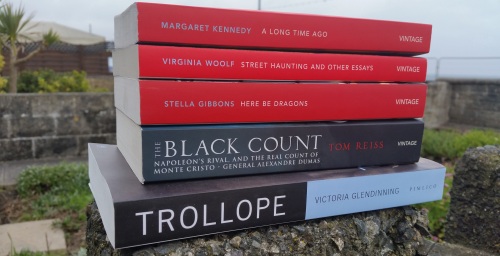 Visits to two charity shops I hadn’t been into for a long time paid dividends.

I remember my parents reading Nevil Shute and Howard Spring, I loved the books from their shelves that I read years ago, and so I was delighted to find two titles I didn’t know in lovely editions.

I saw ‘Death of an Avid Reader’ by Frances Brody in the library and though I liked the look of it I didn’t pick it up because I knew that I had copies of earlier books in the same series at home unread. But when I spotted a like new copy I had to bring it home.

I was always going to pounce on a book by Francis Brett Young that I didn’t have on my shelves. I love his writing. I hesitated over this one because it’s a history of England in verse, but in the end I decided that I didn’t pick this one up I might never see another copy and I might live to regret it. When I came home I remembered that I loved the extract I knew, and I knew that I had made the right decision.

I picked up two more books when I dropped off several bags of books to another charity shop. 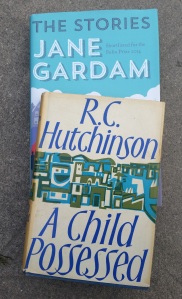 A lovely hardback edition of the collected stories of Jane Gardam that was only published last year for £2 was a wonderful bargain.

I don’t know much about R C Hutchison – and the dust jacket of this book doesn’t give much away – but I picked the book up because it was in condition and it clearly dated from one of my favourite eras. I found some 1950s leaflets from the reprints of society, that somebody must have used as bookmarks inside, adverting authors including Winifred Holtby, Somerset Maugham, Howard Spring and Margery Sharp. I too that as a sign that I should buy the book. When I got home and looked up Hutchinson I found that he had been reissued by Faber Finds and by Bloomsbury Reader, which has to be a good sign.

And then there was the Oxfam Shop.

I can only assume that someone with very similar taste to me had been clearing out, because among lots of books I already own I found:

I looked in again next time I was passing, just in case there were any more. There weren’t, but I found this.

I know the library have copies, but it was such a nice set.

Just one more – a brand new hardback that I just had to run out and buy – another  ‘library building’ purchase.

“The winter of 1924: Edith Olivier, alone for the first time at the age of fifty-one, thought her life had come to an end. For Rex Whistler, a nineteen-year-old art student, life was just beginning. Together, they embarked on an intimate and unlikely friendship that would transform their lives. Gradually Edith’s world opened up and she became a writer. Her home, the Daye House, in a wooded corner of the Wilton estate, became a sanctuary for Whistler and the other brilliant and beautiful younger men of her circle: among them Siegfried Sassoon, Stephen Tennant, William Walton, John Betjeman, the Sitwells and Cecil Beaton – for whom she was ‘all the muses’.

Set against a backdrop of the madcap parties of the 1920s, the sophistication of the 1930s and the drama and austerity of the Second World War and with an extraordinary cast of friends and acquaintances, Anna Thomasson brings to life, for the first time, the fascinating, and curious, friendship of a bluestocking and a bright young thing.“

I’ve stayed out of bookshops today, so that is definitely it for March.

It’s been a bit mad – some lovely review copies have landed too – but there won’t be many months like that.

Though we’ll be visiting one or two bookshops when we have a week’s holiday in Devon next month …..