Olivia Manning: a Life by Neville Baybrooke and June Braybrooke

“Olivia Manning was a superb writer – extravagantly funny and deeply serious at the same time – but her talent was not fully recognised in her lifetime. This beautifully written biography puts the record straight. Born in 1908 in Portsmouth into a naval family, she seized independence at the first opportunity, making a penurious life for herself in London as a furniture painter at Peter Jones, before signing up as a wartime ambulance driver – although she had never learned to drive. Her personality was as idiosyncratic her novels. Her husband, Reggie Smith, was equally a ‘character’ – a BBC producer, self-proclaimed communist and life-long philanderer. Both indulged in affairs, but their unusual marriage was sustained by his lifelong support for his wife’s gifts. After their adventurous war (Reggie was then in the British Council – and probably a spy) they became the centre of London literary life, numbering among their close friends Iris Murdoch, Muriel Spark, Stevie Smith, Ivy Compton-Burnett, Anthony Burgess and Laurence Durrell. Olivia Manning died in 1980 in their house on the Isle of Wight; a cat lover, she left most of her money to the Wood Green Animal sanctuary. “

I’m plannining on reading Olivia Manning’s The Doves of Venus for a challenge soon, so when I saw this book in the library I picked it up to see if it had anything to say about that book. It proved fascinating and I discovered that June Braybrooke wrote inder the name Isoble English. I am reading her novel Every Eye now, and so I have a literary triangle of sorts!

An Incomplete Revenge by Jacqueline Winspear

“1931. Maisie Dobbs’ new case takes her investigation into the pastoral beauty of the Kent Weald where acts of arson, theft and vandelism around the village of Heronsdene have gone suspiciously unreported for more than a decade. With the country in the grip of economic malaise, Maisie is relieved to accept an assignment from an old friend who wants her to uncover the truth behind these crimes, before he can buy part of the magnificent Sandermere estate at the heart of the village.

It’s hop-picking time and Londoners, including Maisie’s assistant Billy Beale, wanting to escape the Smoke for the summer, set up camp in nearby fields. Gypsies, too, have arrived to work the land. Maisie discovers the villagers are bitterly prejudiced against outsiders and, even more troubling, seem possessed by the legacy of a war-time Zepplin raid.

She has less than a month to find out why no one has been brought to justice and why secrecy shrouds the village. She must draw on all of her finely honed skills of detection to solve one of her most intriguing cases.”

It’s lovely to find this on the shelves before I’d thought to check if it was in stock at my branch. I’m intrigued that the cover style is quite different from Jacqueline Winspear’s last book. Does it signal a change in direction or just a change in marketing strategy I wonder?

The Secret Life of Aphra Behn by Janet Todd

“Aphra Behn (1640-1689), poet, playwright, novelist, traveller and spy, was the first woman to earn her living as a writer. This biography uses recently-discovered documents in England and the Netherlands to unmask this elusive author whose works include “The Rover”, “The Fair Jilt”, “Love Letters Between a Nobleman and his Sister”, and “The Forc’d Marriage”. Returning to England after the Great Fire from Antwerp, where she is believed to have spied for Charles II, Behn became a witty and versatile contemporary of Dryden, Rochester and Wycherley. As well as recounting Behn’s story and analysing her works, Janet Todd illuminates the political and social background of the period: the court intrigue, the theatre and its protagonists, and London life before and after the Restoration. Behn was also involved with the Popish Plot and the Monmouth Rebellion, the Stuart kings, Nell Gwyn, the Duchess of Mazarine and many others.”

Doesn’t that sound amazing?! I acquired a lovely green Virago Modern Classics edition of Love-Letters Between a Nobleman and His Sister last year and I wanted to learn a little more about its author and her times before I started reading. This is a fairly hefty tome but it looks very readable. 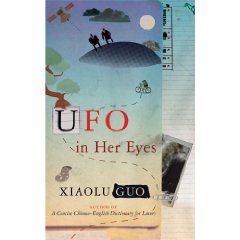 UFO in Her Eyes by Xiaolu Guo

“Silver Hill Village, 2012. On the twentieth day of the seventh moon Kwok Yun is making her way across the rice fields on her Flying Pigeon bicycle. Her world is upturned when she sights a UFThing – a spinning plate in the sky – and helps the Westerner in distress whom she discovers in the shadow of the alien craft. It’s not long before the village is crawling with men from the National Security and Intelligence Agency armed with pointed questions. And when the Westerner that Kwok Yun saved repays her kindness with a large dollar cheque she becomes a local celebrity, albeit under constant surveillance. As UFO Hotels spring up, and the local villagers go out of business, Xiaolu Guo’s startling parable of change imagines an uneasy future for rural China and its relations not only with Beijing but the wider world beyond. “

I have yet to read A Concise Chinese-English Dictionary for Lovers, and I’ve read mixed reports, but I spotted this on the new book shelf and it seemed worth a try.

What did you find in the library this week?