It was Jo’s idea a couple of years ago, and now it’s become an annual event – celebrate the first six months of the reading year by putting six books into each of six categories.

Not quite as easy as it looks. I’ve tweaked the categories to suit my reading style, and because I wanted to push disappointments to one site and simply celebrate some of the books I’ve read and the books I’ve discovered.

Here are my six sixes:

Six books illuminated by wonderful voices from the twentieth century

Six books from the present that took me to the past

Six books from the past that pulled me back there

Wired Love by Ella Cheever Thayer
Esther Waters by George Moore
Griffith Gaunt by Charles Reade
Nine Pounds of Luggage by Maud Parrish
The Count of Monte Christo by Alexandre Dumas
Can You Forgive Her? by Anthony Trollope

Six books that introduced me to interesting new authors

Wake by Anna Hope
Still She Wished for Company by Margaret Irwin
The Lie of You: I Will Have What is Mine by Jane Lythell
Mr Perrin and Mr Traill by Hugh Walpole
My Salinger Year by Joanna Rakoff
None-Go-By by Mrs Alfred Sidgwick

Do think about putting your own sixes – it’s a great way of perusing your reading, and I’d love to read more lists.

May 20, 2014 By Fleur in her World in Book Reports, Fictional, it holds stories of the past, it took me on a journey Tags: Martine Bailey 7 Comments

An  intriguing title, a lovely cover, a promise of history and mystery gave me high hopes for ‘An Appetite for Violets’, and I am pleased to say that they were met. More than met.

The opening sets up the story beautifully.

A man arrives at a villa in Tuscany, looking for his sister, the lady of the house. But she is gone; her whole household is gone; only her little dog, the dog he knows she never would have abandoned, remains. Downstairs he finds a dining table is laid for a feast.  He climbs the stairs, fearful of what he might find.  But all he finds is a mannequin, clad in a lovely pink dress, and an envelope. He opens the envelope and a fabulous ruby falls out.

I had to find out what had happened, what led up to that extraordinary scene. 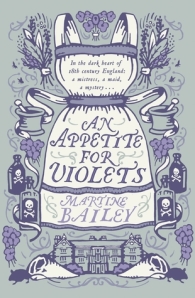 A few months earlier Biddy Leigh had been an under-cook at Mawton Hall. I liked her from the moment we met: she was bright, she was curious, she was capable, she loved what she did, and her future was full of promise. She was going to marry her young man, and they were going to run a tavern together.

Biddy didn’t know it, but her life was going to change.

The widowed master of the house brought home a new, young bride. Lady Carinna was spoiled, temperamental and horribly demanding. She had her eye on Biddy for some reason, and she often called her to her side. When Lady Carinna decided to travel to her uncle’s estate in Italy she decided than Biddy would be in her retinue. It wasn’t what Biddy wanted, but her young man told her that they needed the five guineas that she would earn for their future, and it was only for a year. She knew that she had to go.

Biddy was thrilled when Mrs Garland, the cook who had guided and taught her, entrusted her with ‘The Cook’s Jewel.’ It was a journal that had been written in by generations of cooks; an extraordinary anthology of recipes and knowledge. The contents of that book were scattered through the story; recipes from the past and recipes that Biddy learned on her journey across Europe. It was a lovely, lovely touch, and oh how I wish I could have a copy of ‘The Cook’s Jewel’ to keep with my copy of ‘An Appetite for Violets.’

It was clear from the start that Lady Carinna was a schemer, but it took time for her plans for Biddy to become clear. At first I thought I was a step ahead, that I could see what she couldn’t. But she caught on, and she held her end up brilliantly. But she didn’t see all of the consequences, and neither did I.

I loved Biddy’s voice, and there were other voices too, and they opened out the story. There was Mr Pars, the butler, who had nobody who could talk to, but who could share his feelings in his letters to his bother. And there was Loveday, a black slave who had been torn away from his wife and children on a remote island. He and Biddy became friends; she was the only one who was interested in his story, who treated him with respect, who called him Mr Loveday.

Some very clever plotting explained just how that opening scene came to be, with lovely twists and turns, marvellous drama, and lots of lovely details. After that, the story moved forward to a very fine ending. It was unexpected and it was exactly right.

I loved the storytelling: the voices were distinctive, the period touches were lovely, and the story was captivating. There’s a lot more than history and mystery, but this is too good a book for me to spoil for anyone else. It’s a lovely, it’s distinctive, it’s full of interest, and it’s told with just the right amount of verve. The author’s love of her story and everything in it shone from the pages.

I can understand that: she’s written a fabulous first novel!