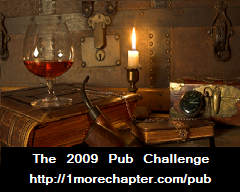 The 2009 Pub Challenge is being hosted by Michelle at 1morechapter.com.

It’s a challenge to read at least nine books published for the first time in your country in 2009. The rules are here.

I have read some great new books this year and I’m looking forward to more next year as well as picking up ideas from others.

I have had a look at what’s due out next year in the UK and I can already see four books that I want to read asap:

The Girl Who Played With Fire, by Steig Larsson
(UK release 6th January 2009)