“He wanted to go home. he wasn’t ready yet for the hustle and bustle of being arrested. He was too tired to answer people’s questions, to explain to his lawyer, who had never handled anything more complicated than a will or a real estate transaction, that he now had a murderer for a client. He had to have time to rest to prepare himself.

Gradually, as he sat thinking, it occurred to George that to give himself up was pointless. Even stupid. When they caught up with him, fine. He’d go to trial and to prison without complaining, with dignity, even. But to spend more time locked up than absolutely necessary – it made no sense.”

No, that isn’t a spoiler. It’s a short extract from the first chapter of an Edgar winning novel. A chapter that has the murderer narrate his murder.

So this isn’t a whodunnit. It’s a why did he do it? It’s a how will he cope afterwards? It’s a will he get caught? And it’s a very good book.

George Wilcox was a quiet man. An octogenarian, a widower, a gardener, a library user, a hospital visitor. What possessed him to kill Carlyle Burke? A newcomer to the town, a man who kept himself to himself.

The story of what happened next is told from three perspectives. 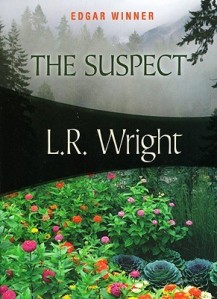 There’s George himself, of course.

There’s Karl Alberg, a middle-aged, divorced, very capable policeman. He senses that there is something amiss as soon as he talks to George, but there is little evidence and little credence given to his professional instinct.

And there’s Cassandra Mitchell, the town librarian, who began a tentative relationship with Karl after he answered her lonely hearts advertisement and who has regular chats with George in the library.

The story is propelled by Karl’s growing suspicions about George, his attempts to prove his guilt, and his digging into the past to prove that the two men had history and that the motive for murder lay there. It’s very well done, if a tiny bit predictable.

But the real strength of the book comes from other things:

From the perspective, completely free of any questions about who or how.

From the setting, on Canada’s ‘Sunshine Coast’, an area known for its temperate climate and beautiful coastline. It felt a little like Cornwall, a little like home.

And most of all from perfectly drawn characters, well handled relationships, that offered a lovely balance of intrigue, humour, and real life.

The prose was clear, brisk and very readable, the story was moving along steadily – a lovely mix of cosy mystery, police procedural, psychological study, and human story – but then came a well executed twist and an increase in intensity.

I suspected that Karl and Cassandra were offering the foundation for a series – and I’d be glad to meet them again – but it was George and his story that stayed with me.

The Suspect isn’t quite perfect: there’s no real mystery, no real shocks, and a slightly unconvincing motive. But as a character driven study of a crime it works beautifully.