June 25, 2015 By Fleur in her World in Book Reports Tags: Hannah Rothschild 14 Comments

This is a veritable chocolate box of a novel.

It’s it looks gorgeous, it’s full of lots of different lovely things, it’s almost too much, but its completely irresistible.

I thought for the first time in years – of a particular box of chocolates that my father bought for my mother when I was a very small girl. I remember that it was large, it was casket shaped, and it was covered with pictures of ladies in long dresses. I was smitten with that box, and my mother gave it to me in the end, to use as a jewellery box. I kept that box for years and years, even after one of my aunts gave me a proper, grown-up jewellery box as an eighteenth birthday present …. 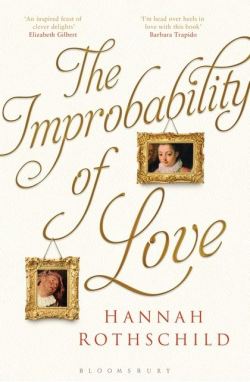 I looked for an image, but I couldn’t find anything remotely like it.

It’s strange and lovely that a book can pull out a memory like that.

‘The Improbability of Love’ could do that because its so vivid and because it was so clearly written with love and about things the author loved.

Now, back to the story

‘The Improbability of Love’ is a lost masterpiece; a painting by Antoine Watteau, the celebrated 18th century French artist. It had a fabulous provenance, it had been owned by the great and the good, but it had been lost and somehow it found its way into a London junk shop.

That was how it came to be owned by Annie McDee, a young cook who was nursing a broken heart.  She liked it, she was interested to find out a little more about it, but she had no idea just how special her painting was or just what an extraordinary story was about to unfold.

Actually, it’s not just one story, it’s a wonderful melange of stories:

It’s a cornucopia of delights;  underpinned by a lovely depth of knowledge of art, history and the art world. I was wonderfully entertained and I learned a lot along the way.

The writing is smooth and natural, and it swings through a lovely, diverse range points of view and voices, including ‘The Improbability of Love’ himself.

The painting spoke fondly of his creator, proudly of his glorious history, and with concern about its present situation and its fears of what his fate might be. It was a wonderful creation, and I could have spent many happy hours listening to him. I even wondered how he might get on with the armchair who told her own story in Memoirs of an Armchair ….

I was so impressed with the richest and depth that Hannah Rothschild gave to the life and history of this particular artwork, and I had to remind myself from time to time that ‘The Improbability of Love’ was fictional.

It isn’t subtle and it isn’t a book to analyse; it’s a fabulous entertainment and it’s terribly easy to keep turning the pages.

If anything there’s a little too much going on. There were lots of things I’d like to have had a little more of, but there wasn’t much I’d be willing to lose to make more space.

Towards the end things get a little rushed and a little silly, but the grand denouement was exactly right and the ‘what happened next’ was the perfect way to bring this story – a real one-off – to its final conclusion.