June 21, 2015 By Fleur in her World in Factual, it took me to another time and place Tags: Anthony Trollope 23 Comments

I picked up ‘The Vicar of Bullhampton’ because I was looking for a Trollope that didn’t centre around a will or a court case. I should have read the synopsis a little more carefully because there is a court case – one concerned with crime this time, not inheritance – but I didn’t mind too much, because I found much to enjoy in the three entangling stories involving said vicar.

This isn’t my favourite Trollope – and it’s very nearly a curate’s egg – but I did find a great deal to enjoy.

I was very taken with the vicar – Frank Fenwick – who was a good and compassionate man, with a stubborn streak that stopped him being too perfect. I was equally taken with his wife, Janet, and I loved the relationship between the two of them. They had a real, believable genuinely happy marriage.

The first story is a classic Trollope love triangle, concerning the possible marriage of Mary Lowther, a childhood friend of the vicar’s wife. The Fenwicks promoted a match with Harry Gilmore, a Bullhampton squire and an old friend of the vicar. He fell in love with her; Mary recognised that he was a good man, but knew that she did not him as a wife should love her husband. When Gilore proposed, she does not reject him outright, but she asked for time to consider. Because she knew that he was a good match, and that maybe she would never find her true love. Mary did find true love, with her second cousin, Captain Walter Marrable. But their circumstances meant that they were not in a position to marry, and that they maybe never would be.

My feelings about Mary changed over the course of the story. I worried at first that she would be another Alice Vavasor; when I realised that she wasn’t I came to like her and feel a great deal of sympathy and empathy; sadly that didn’t last. I’m afraid that Mary – as is often the way with people in love – became oblivious to the feelings of others. And it didn’t help that her family story was a little too broad and the development of her true love a little difficult to believe. 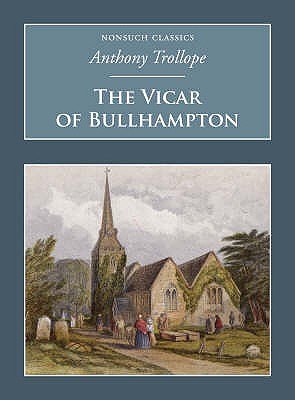 It wasn’t that it was bad, but I know that Trollope can do much, much better, and I enjoyed the other strands of the story more.

The second story is of the family of Bullhampton’s miller, Jacob Brattle. His youngest son, Sam, had been a hard worker at the mill, but when he fell in with bad company his standards slipped and he was absent far too often. When a Bullhampton farmer was murdered in the course of a burglary suspicion fell of Sam’s associates, and it was known that he had been with them. The vicar had known Sam since he was a young boy, he believed him when he said that he was innocent, and he did his best to help.

He also tried to reconcile the miller with his daughter Carry. She had been seduced by a soldier, she had been thrown out by her appalled father, and since then she had been living as a ‘fallen woman’. This being a Victorian novel Trollope did not address the question of how she survived as a woman alone, but his meaning was clear. Her situation was complicated by her involvement with one of her brother’s associates; but that might also be the key to saving her brother and reuniting her with her father ….

I loved the twists and turns of this story, and I loved the very real emotions and reactions of different family members. But what made this book exceptional was the portrayal of the ‘fallen woman’. She wasn’t repentant and striving to be virtuous, she wasn’t defiant and falling further, she was simply a young woman struggling to come to terms with the consequences of what had happened and the harsh realities of this situation.

This is what I love about Trollope. He’s utterly conventional, writing about the natural roles for women being marriage and motherhood, but on the other hand he clearly hoped for a society that had understanding and compassion for those who struggled to reach those goals.

This books illuminates those different sides of Trollope better than any of the others I have read.

I couldn’t completely believe the way the story of the Brattle family played out, but it felt right – emotionally and psychologically – and I wanted to believe it.

The third story concerned the Marquis of Trowbridge, Bullhampton’s principal landowner. He was so appalled when the vicar took up Sam and Carry Brattle’s causes, that he gives the Methodist minister, Mr Puddleham, a plot of land on which to build a new chapel – a plot of land right opposite the vicarage gates. The Fenwicks were aghast as a red brick edifice grew higher and higher, but they had no idea what they could do about it. Until Mrs. Fenwick’s brother-in-law, a brilliant London barrister, looked into things ….

This story balanced the others beautifully, with a well judged mixture of drama and comedy.

Indeed the balance was what struck me about the whole book: three stories different in tone and content, considering many aspects of the human condition, considering many sides of society, And yet they sat quite naturally together, speaking, profoundly and movingly, about forgiveness, about acceptance, and about reconciliation.

I found much to love. Wonderful, real, believable human characters and relationships; lovely letters, reported by an author telling the tale in his own inimitable style; and a large village – or maybe a small town – in the Wiltshire countryside.

And in the end the strength of the whole allowed me to let go of the weaknesses of some of the parts.