I do wish that I could see more people reading more of G B Stern’s books.

I know that ‘The Matriarch’ is back in print, in a lovely new editions; I know that the two books about all things Austen that she wrote with Sheila Kaye-Smith still have many admirers; but she wrote so much more than that – fiction and non fiction, for adults and for children.

I can understand why she’s still relatively obscure, because she wrote a great many books, because they are wildly diverse, and because it is said that some of the are not so strong. But I haven’t found a book I haven’t liked yet, she wrote fiction with such intelligence and wit, and her multiple memoirs – where she writes of anything and everything that has captured her interest are sublime.

I was delighted to find one of her more obscure titles – a novel named ‘Modesta’ that was published in 1929.

I knew nothing about it, but when I started reading I found that I had an utterly charming  social satire, firmly built on an excellent understanding of human nature. 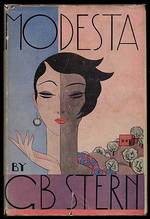 Modesta was an Italian peasant girl who dreamed of being an English lady. Her father was a landlord and so she was able to spend time talking to his guests, offering them charm and flattery, subtly pointing out the differences between their situation and hers; admiring their lovely things, especially the dresses, the likes of which she could only dream about; arranging  the flowers and make everything nice for them. She was always so, so busy; but she always managed to take the nice jobs and to leave the not-so-nice jobs for her sisters!

She was a minx, but I just had to love her.

Lawrence Ferrier, a wealthy and  idealistic young Englishman proposes marriage, with the chivalrous idea of granting her every wish.

“And here she was, an English signora, Mrs. Laurence Ferrier. Modesta could not pronounce her own name, but she had visiting cards, and that was a joy.”

Modesta  had a lovely time, but she didn’t know when enough was enough.

Her husband had loved the peasant girl he had married, but he didn’t love the spoiled society woman he  turned her into. He blamed himself, and he decided that he had to do something about it.

He sent her back to Italy – alone – so she would have to stand on her own two feet!

He planned to follow her – once she had learned her lesson!

Her husband was happy with that – and he found that the change in lifestyle suite as him as much as it suited has wife.

The story plays out beautifully, and there’s a lovely twist at the end.

The style is warm, witty and conversational. It’s clear that the author loved the people and places she is writing about and that she was having a lovely time telling their story. Every character is clearly drawn, their dialogue is exactly right, and there’s just the right amount of detail to make the story sing without weighing it down.

Everything lives and breathes, and I loved it.

As a whole it isn’t quite perfect: there are elements that haven’t dated as well as they might have and a sub-plot involving the Ferrier family doesn’t really work.

It is a lovely light read though , with just enough serious underpinnings to stop it floating away, and I’m so pleased that I met Modesta.