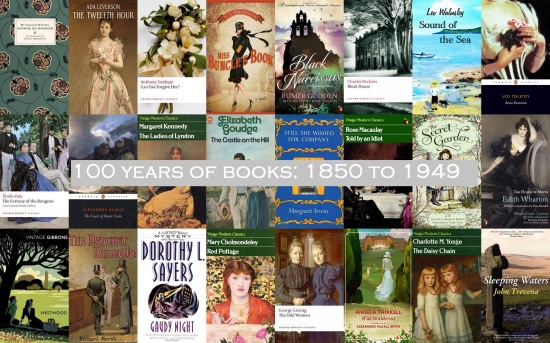 I ditched my 100 Years of Books project when I made a new design for my reading life towards the end of last year.

I didn’t miss it at first, but in time I did, especially when other people – Simon – Annabel – I’m looking at you! – started lovely new projects!

I’ve learned that I need a project, but I also need plenty of space to read other things.

And so I’m picking up the threads again.

But I’ve taken away the deadline. It’ll be done when It’s done.

If it can be done.

I’m not going to read books that I don’t want to read just to fill in missing years so I might never finish. But I think I can, if I do a little re-shuffling of books and authors along the way, so that the authors with many books can fit around the authors with not so many.

I’m going to carry on with my 10% reports every 10 books, and because I’ve read a few books from missing years since I ditched the list I’m able to say – here’s my third 10% report!

1865 – Can You Forgive Her? by Anthony Trollope

I am so pleased to say that I have finally discovered why so many readers love Anthony Trollope. In fact, if it isn’t wrong to say so after reading just the one book, I am now one of them. I’d picked up one or two books over the years and they hadn’t quite worked. It wasn’t that I didn’t like them but I didn’t love them, they weren’t the right books; I had to find the right place to start, the right book at the right time at the right time, and this book was that book.

1867 – Cometh Up as a Flower by Rhoda Broughton

The story is simple, but it is made special by the way it is told. Nell’s voice was underpinned by excellent writing, and Rhoda Broughton’s understanding of character and her command of the story stopped this from becoming a sensation novel. It’s a very human story of love, passion, betrayal, loss …

At first I thought that Mona might be a little too nice, a little too good to be interesting, but she grew into a very fine heroine. She continued to be good, but she was ready to stand up for herself, she learned to be practical and capable, and she coped well with some very tricky situations.

She was hired, she was given an advance on the salary that was far more than she had expected, and she learned that the work would be not very demanding at all. It seemed almost too good to be true. It was, and it didn’t take Miss Thorn very long at all to work out that the Secretarial Supply Syndicate was a front for a gang of criminals; con men who were ready to use any means necessary to extract money from their victims.

1910 – The Getting of Wisdom by Henry Handel Richardson

I had to love Laura. Her letter’s home were a riot. I loved that she delighted the invitations to tea that the other girls dreaded, because it gave her a chance to examine new bookshelves, and that made the fear of being called on to recite or perform fade into insignificance. I loved her joy when an older girl look her under her wing; and her outrage when she found that she had a young man.

I was intrigued to see J C Snaith described as a ‘teller of enthralling tales.’ I had never heard of the author, and when I went to look for him I found that he was very obscure, but I found a book titled ‘The Adventurous Lady’ that promised so many things I love – a train, a governess, a country house, a play – and so I had to start reading.

William and Emily Crowne were the loveliest of children. They were attractive, they were imaginative, and they played so happily together, caught up in their own world and oblivious to the world around them. They didn’t see how jealous the Frobisher children, Trevor and Charlotte, were. They didn’t know that their father’s notoriety would follow them into their adult lives.

Something else I particularly liked was the way Patricia Wentworth threaded serious questions – about Margaret’s life as a single woman and the choices that she made, about Margot’s vulnerability and the position she had been left in, and most of all about the consequences of not knowing our own history – through an classic golden age style mystery. The story is bold, but its author clearly understands where subtlety is required.

Caroline  – the heroine of ‘Four Gardens’ – would be of the same generation as my grandmother. My mother’s mother that is; my father’s mother was a good deal younger. They were born when Queen Victoria was on the throne, near the end of her reign but not so near the end that they didn’t remember her. Their values were formed by that age, and by the Edwardian era that followed, and after that they lived through Great War and the repercussions that reverberated through the twenties, the thirties ….

The full list of what I’ve read is here and my first two 10% reports are here and here.

I’m well on my way to my next 10% already, but I have lots more years to fill and so recommendations – especially for the earliest years – would be very welcome.