February 28, 2015 By Fleur in her World in Looking Backwards and Forwards 14 Comments

It seems to have come and gone amazingly quickly!

Hereabouts it has been a damp, grey month, the council has been digging roads up here there and everywhere, and because they have taken our old railings down and haven’t started putting the new ones up we still can’t get to the promenade or the beach.

The spring cleaning bug bit early this year; we’ve revamped one room and have plans for other parts of the house.

I read less that I have for a very long time. But I read some very, very good books, especially the first one and the last one:

The Luminaries by Eleanor Catton
Maiden Voyage by Denton Welch
Set in Stone by Linda Newbery
Vanessa and her Sister by Priya Parmar
What Lies Within by Tom Vowler
Girl in the Dark: a Memoir by Anna Lyndsey

I’ve only written about Vanessa and her Sister, but my head is full of things I want to say about ‘Girl in the Dark’, and I’ll catch up with the others very soon.

The TBR Dare stuck for a second month, but I’m calling time on it now. It’s helped me to rationalise my library borrowing, it’s made me more aware of the books I have on my own shelves, but I’ve reached a point where I’m thinking too much about what I can and can’t read.

I’ve picked up and dropped far too many books this month, and I have eight books in progress which is just plain ridiculous.

There are a couple of specific points too.

.
And there’s a book in this month’s books shopping that I know I won’t be able to resist:

The local charity shops have served me well this month.

Instead of a Letter by Diana Athill is an autobiography from 1963, and a very pretty little hardback.

I read about Something in Disguise by Kate Colquhoun in the paper and then I spotted it on the shelf, and though I wasn’t sure I’d read a book about a Victorian gardener, I decided that it was a sign. And that if I don’t read it the man of the house probably will.

Country Girl by Edna O’Brien was on the same shelf and quite irresistible.

Civil to Strangers by Barbara Pym is an upgrade; from a tatty old copy to a Virago Modern Classic.

And La Batarde by Violette Leduc is that rare and special thing, a Virago publication that I didn’t know I existed until I spotted it. Indeed I hadn’t even heard of the author, and she does see quite obscure, so here’s the synopsis:

“An obsessive and revealing self-portrait of a remarkable woman humiliated by the circumstances of her birth and by her physical appearance, La Batarde relates Violette Leduc’s long search for her own identity through a series of agonizing and passionate love affairs with both men and women. When first published, La Batarde earned Violette Leduc comparisons to Jean Genet for the frank depiction of her sexual escapades and immoral behavior. A confession that contains portraits of several famous French authors, Leduc’s brilliant writing style and attention to language transform this autobiography into a work of art.”

And then there was a little trip to the St Just Café Bookshop. 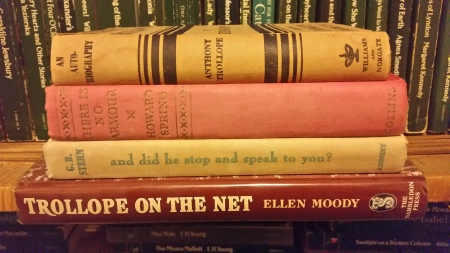 It was a plain little hardback but it was in lovely condition and so An Autobiography by Anthony Trollope had to come home.

There is No Armour by Howard Spring was a lovely addition to a growing collection of his work. I read some of his book from my parents shelves years ago, I read his lovely childhood memoir more recently, and I love the way he writes.

I pounced on a book by one of my most wanted authors: And Did He Stop and Speak to You? by G B Stern. It’s a collection of her essays about literary contemporaries, including Sheila Kaye-‘Smith, R C Sherriff, Pamela Frankau ….

But the book of the month was Trollope on the Net by Ellen Moody.; a book of essays inspired by an early internet discussion group, published by the Trollope Society in 1999.

Wouldn’t it be lovely if the email addresses that adorn the cover were real?

I’ll settle though for meeting – and revisiting – them on the printed page.

I’ve balanced a wonderful month of bookish acquisitions with a good bit of shelf clearing. We dropped eight books of boos at a charity shop last weekend, I’ve found a new home for my mother’s complete collection of Inspector Morse videos, and three more bags of books and bric-a brac are ready to go.

That makes me feel much more positive about reading books and writing about books in March.

And I hope that Briar will get her promenade and her beach back.