February 10, 2015 By Fleur in her World in Book Reports, Fictional, it holds stories of the past Tags: Dorothy Richardson, Louisa Treger 9 Comments

I’ve been aware of Dorothy Richardson for a long, long time without ever reading her work.

When I was very young and Virago Modern Classics were a brand new idea I remember seeing the Pilgrimage, her thirteen novel series, collected in four thick volumes that had covers that were similar but not quite the same. They looked very important and rather frightening.

Years later, I looked at those four big books again and I learned how very significant Dorothy Richardson had been. That she published the first complete work of stream-of-consciousness fiction, and from that first novel a whole series of autobiographical novels grew, speaking profoundly of the female experience.

Virginia Woolf, who published her own first novel in 1915,  praised her for inventing “the psychological sentence of the feminine gender …..”

I meant to begin reading the novels, and the first volume of Pilgrimage was sitting on my bedside table when I went to hear Louisa Treger speak about Dorothy Richardson and about ‘The Lodger’, her first novel, inspired by Dorothy’s life and writing. She spoke with such erudition and such love that I was inspired. But I was also left with a dilemma. What should I read first? The thirteen novels she wrote or the one novel about her?

I settled on the one novel about her, hoping that it would inspire me to start the long journey through the thirteen. And I think it has. 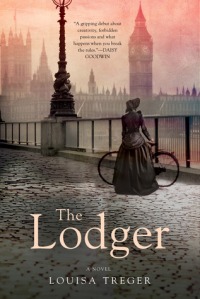 Dorothy’s affair with H.G. Wells is at the centre of the book and it is story of adultery and regret; told with understanding and horribly easy to believe. Bertie Wells, was married to one of Dorothy’s old school friends, but still she was drawn into a relationship with a man whose charms a more mature woman, a less vulnerable woman, would have found easy to resist.

She did feel remorse over her betrayal of a friend, but it was mixed with so many other feelings. She was grieving after her mother’s recent suicide, something she believed she could, she should have prevented. She was living in  London boarding house, she was working at  a dull job in a dentist’s surgery, but she knew that she could do more, be more..

I felt for her, I really did. Louisa Treger presented the life and the emotions, the hopes and the dreams and the fears of a real, complex, fallible woman quite beautifully.

She was  a woman who knew that she had to make a life for herself.  She began to write fiction – ironically, after being encourage to do so by her lover –  and she began a new relationship, discovered another aspect of her sexuality, with a new lodger at her boarding house. They were both feminists; one would be imprisoned as she fought for female suffrage, and one would struggle to find a pure form of writing of a woman’s consciousness:

‘She didn’t want to instruct her reader what to think and feel. . . . The inner world of her heroine — her maturing developing consciousness — would be all there was.’

That was when this book began to fly.

It had been a very well told story of  one woman’s life, written in traditional prose rather than stream of consciousness that woman wrote – a wise choice I think, because this is a biographical not an autobiographical novel –  but then it found a passion and a depth that had been just a little lacking in the story of the life and the affair

I had been very taken with woman and with the progress of her life, but when I read about the writing I was inspired.

And maybe that was right.

Because now I want to know more about Dorothy Richardson, and I know that the first of those four volumes is still on my bedside table ….