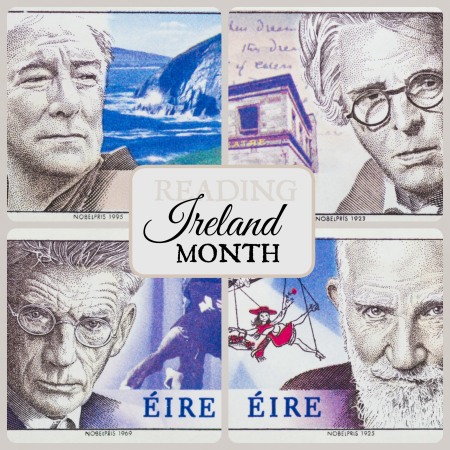 My first thought when I read about Reading Ireland Month was that it would would beautifully with the TBR Dare, because I know that there are Irish books to be read on the Virago bookcase and at various other places around the house.

There are more than I’ll read in March, but I do like to make a list and to have choices.

The first name that came to mind was Molly Keane. I love her writing but there’s something about her books – a sharpness, a distinctiveness, I don’t know quite what to call it – that makes me inclined to space them out. I haven’t read one for a while though and I think it’s time. Maybe ‘Mad Puppetstown’:

In the early 1900s Easter lives with her Aunt Brenda, her cousins Evelyn and Basil, and their Great-Aunt Dicksie in an imposing country house, Puppetstown, which casts a spell over their childhood. Here they spend carefree days taunting the peacocks in Aunt Dicksie’s garden, shooting snipe and woodcock, hunting, and playing with Patsy, the boot boy. But the house and its inhabitants are not immune to the “little, bitter, forgotten war in Ireland” and when it finally touches their lives all flee to England. All except Aunt Dicksie who refuses to surrender Puppetstown’s magic. She stays on with Patsy, living in a corner of the deserted house while in England the cousins are groomed for Society. But for two of them those wild, lost Puppetstown years cannot be forgotten ….

Mary Lavin is best known for her short stories, but she also wrote novels and I have two in my Virago Collection. I most like the look of ‘The House on Clewe Street’

Theodore Coniffe, austere property owner in Castlerampart, looks forward to the birth of an heir when his third and youngest daughter, Lily marries. A son is born, but the father, Cornelius Galloway, is a spendthrift who dies young, leaving the child to the care of Lily and her sisters, Theresa and Sara. Their love for Gabriel is limited by religious propriety and his youth is both protected and restrained. At the age of twenty-one Gabriel runs away to Dublin with Onny, the kitchen maid. Here they tumble into bohemian life. But Gabriel is ill-suited to this makeshift freedom and finds the values of Clewe Street impossible to evade.

I absolutely love Kate O’Brien‘s writing and I have read all of her books that were published by Virago, but I have one other sitting on a shelf on the next bookcase along. ‘Of Music and Silence’ looks lovely, I’ve been saving it, but I think its moment might have come.

It is the story of two penniless Irish girls who are sent to the Continent to become opera singers. Lovely, vulnerable, unaware, they are first flung into a regime of rigorous training and then released into the fantastic, exacting world of Italian opera in the 1880’s, with its dedicated striving, love, jealousy and passionate friendships.To Clare and Rose, student life and their fellow-students at the pension are as great a revelation after the green quiet of Ireland as the sun-drenched atmosphere of Rome, the picnics on the Campagna, moonlit suppers in trattorie above the sea.Thepension is followed by some of the world’s great opera stages as the girls sing their way upwards towards prima donna roles and fame. And alongside their development as singers the author traces compassionately their development as women, loving and desired, in this forcing house of emotions, where all are obsessed by song, and love is heightened by the spendour of music.

I found Tana French on the same bookcase, on the next shelf down. I’ve read her first three novels, and I’ve been meaning to read her fourth – ‘Broken Harbour’ – for quite some time.

In the aftermath of a brutal attack that left a woman in intensive care and her husband and young children dead, brash cop Scorcher Kennedy and his rookie partner, Richie, struggle with perplexing clues and Scorcher’s haunting memories of a shattering incident from his childhood …

The Collegians by Gerard Griffin is on the same shelf, and it’s on my Classics Club list.

A romantic melodrama set in rural Ireland in the early 19th century, this complex story of love, rivalry, secrecy, and betrayal, based on a real case of 1829, was one of the most successful thrillers of its day

I’m a little wary of ‘There Were No Windows’ by Norah Hoult, which I know is waiting on the Persephone bookshelf, because it deals with ageing and dementia and the stage of life where my mother is now. But there’s a voice in my head saying that maybe that’s why I should read in now.

Set in London during the blackouts of the Blitz, this 1944 novel describes the last months of Claire Temple, a once-glamorous woman who is now losing her memory. Divided into three ‘acts’, beginning with Claire’s own experience of her dementia, the rest of the book is told through the characters who work for or visit her. As Claire struggles with her memory, the reader must reconstruct not only her life but her identity.

‘The Wild Geese’ by Bridget Boland is another book I could pluck from the Virago shelves. It’s an epistolary novel – which is always a good thing – and it touches on an aspect of Irish history that I don’t know much about.

In eighteenth-century Ireland, Catholics are forced to practice their religion in secret, they cannot buy or improve their land, nor enter any profession or trade. In this climate a lively underground traffic develops between Ireland and Europe–young boys are smuggled to Catholic schools abroad and many eventually join the armies of foreign princes. If they return to their native land, these “Wild Geese” are in danger of their lives. Through the story of the Kinross family and their letters to one another, we learn of these desperate times: of Brendan’s struggle to maintain the Kinross estate; of the dangers Maurice faces as an outlaw in his own country, and of their sister Catherine and her love for Roderick O’Byrne, a soldier recruiting for Irish regiments in France.

Maura Laverty is another author I discovered through Virago. I’ve read the two of her novels that Virago published, but I have another novel that hasn’t been reprinted that I found in a second-hand bookshop a year or two ago. ‘Alone We Embark’ is another book I’ve been saving. It’s a plain little hardback, I haven’t been able to find out much about it, but I loved the two books I’ve read more than enough to take this one on trust.

I’ve been reading to read Somerville & Ross for ages, and I have just one of their books in the house, somewhere upstairs – ‘In The Vine Country.’

The Irish pair tour Medoc country at the time of the vine harvest. During their stay they dance with the harvesters, drink freshly trodden wine, stay in a barn with dubious bedlinen and visit a grand chateau.

Also upstairs is a proof copy of ‘Black Lake’ by Johanna Lane. I started reading last year, but when the story went in a quite different direction to the one I expected I put it down again. I meant to pick it up again, and I really don’t know why I haven’t.

The last book I bought in December, before the TBR Dare began, was a newly reissued Victorian novel – ‘The Quest for Fame’ by Charlotte Riddell  – it’s waiting on my bedside table.

After the death of her mother and the loss of her family’s fortune, it falls to young Glen Westley to do what she can for herself and her ailing father. Determined to make her own way in the world, she moves from the West of Ireland to London and works tirelessly to succeed as a novelist, despite the limitations her sex and nationality represent. Having struggled so long for fame, it is at last thrust upon her – but fame always comes at a price.
* * * * * * *

There’s just one more book that I can think of, and it’s in the virtual TBR. I read Niall Williams’ early novels and I liked them, but I haven’t read anything of his for years. When I save ‘The History of Rain’ on the Man Booker long-list I thought it was time to try his work again.

Bedbound in her attic room beneath the falling rain, in the margin between this world and the next, Plain Ruth Swain is in search of her father. To find him, enfolded in the mystery of ancestors, Ruthie must first trace the jutting jaw lines, narrow faces and gleamy skin of the Swains from the restless Reverend Swain, her great-grandfather, to grandfather Abraham, to her father, Virgil – via pole-vaulting, leaping salmon, poetry and the three thousand, nine hundred and fifty eight books piled high beneath the two skylights in her room, beneath the rain.

That’s pretty much all I can find, and that’s probably the right number of books form me to have a choice and not waste good reading time dithering.

Are there any you would recommend – or any that you’re particularly curious about?