January 16, 2015 By Fleur in her World in Catching Memories and Seeing Stars 15 Comments

This is an ongoing project that I write about from time to time.

It started when I read ‘A Hundred Pieces of Me’ by Lucy Dillon. When Gina and her husband split up she moved to a lovely new flat, and she vowed to clear out all of the ‘things’ that she had acquired over the years and live a simpler life.

Author Jane Johnson brought the idea to the front of my mind when I heard her speak at the Penzance Literary Festival last month. She suggested that there were two kinds of people: the kind who want to seek out the exotic and the kind who want to gather the familiar around them. she’s the former and I’m the latter. but a thought came into my head. Those of us who gather the familiar also need the space to gaze at the stars and dream. 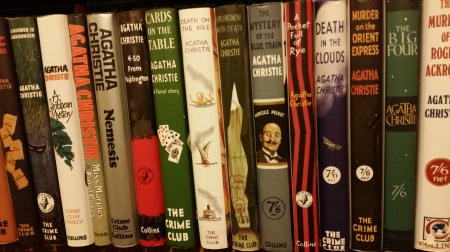 Do you remember, quite a few years ago now, those book clubs whose adverts used to pop up on the back of Sunday supplements? You could order a few books for pennies, and then you would receive the club magazine and be offered a book each month that you could choose to accept or not; there was no commitment at all after you had bought a certain number of books in your first year ……

The advertisements were alluring, but I always thought that it sounded a little too good to be true. And I learned that it was. The editions were cheaply produced facsimiles, and if you weren’t quick off the mark saying ‘no!’ to the book of the month it was assumed that you had said ‘yes!’ and it would land on your doorstep.

One day the book clubs found a new strategy. They picked up their telephones.

When my mother received calls from warm, chatty booksellers asking if she would like a free book she was always delighted. She didn’t take in the swiftly delivered spiel, saying that she would receive another book that she would have to pay for, and that the rest of the series would follow.

I became very efficient at sending those second books back and making sure that no more books would follow. But one day I slipped up and we were committed to a series. It was maddening, but at least it was Agatha Christie, who my mother and I both read and might re-read.

The books arrived, month by month, until we had the complete set. I say ‘complete set’ but it wasn’t really. We had a full set of Miss Marples, a small selection of Poirots, and several volumes of short stories in nice facsimile editions. I thought that I might lose a few and acquire one or two of the key titles that we were missing. But when I bought home another title – ‘Evil Under the Sun’ I  saw that it was a little bigger than our books and printed on better quality paper.

I dropped the idea of building a collection and the books sat in limbo for quite some time. Eventually, I decided that they could go. There will always be Agatha Christie books in the library if I want to read them again; and I don’t want to re-read them just because they’re there, rather than reading more of the many books I have yet to read.

Most of all though, I don’t those particular books sitting in the house as a reminder of my mother’s increasing mental frailty.

They also remind me that we had to change the telephone number we’d had since we first had a phone. Because my mother would receive calls while I was at work, telling her she was due a refund, that they had to confirm all of her personal details, that they needed her bank details …..

She took people at face value, she believed that people were fundamentally good, and it was so difficult not to disabuse her of that faith, not to make her fearful,  as I tried to make sure she was safe and well and happy.

This particular memory has to be caught and put away; it won’t be forgotten but I won’t have to remember it every time I look at a particular shelf of books.

The local charity shops are always appealing for books.