January 5, 2015 By Fleur in her World in Book Reports, Fictional, it holds stories of the past, it tugged at my heartstrings Tags: Lissa Evans 11 Comments

Isn’t it lovely when you find a story that really strikes a chord?

This is the story of ten year-old Noel Bostock. He lived in Hampstead with his godmother Mattie; she had been a suffragette and she had firm and individual opinions, formed over the course of a life well lived. Noel was bright and he was bookish; he had little in common with children his own age, he didn’t understand them at all, and so he had few friends; but he was very happy with Mattie. They understood each other.

But when Mattie’s mind began to fail, when she began to lose her memory and to act oddly, Noel struggled to cope. He didn’t ask for help, because he knew that Mattie wouldn’t want that. Tragedy ensued.

This was the part of the story that struck a chord, because I have had to support and my own mother, who is on the same path that Mattie followed. Lissa Evans telling of this part of the story was pitch perfect and profoundly moving. 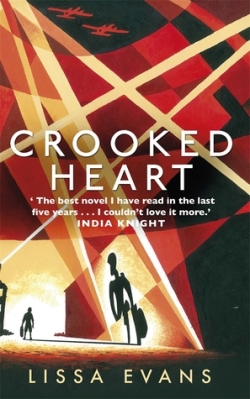 Noel tried hold on to his home and his way of life, but the encroaching war, and there own wish to not be too involved, led his new guardians to send him as an evacuee, to the relative safety of nearby St Alban’s.

The sullen child, who had a limp and ears that stuck out terribly, had a long wait to be offered a home; but eventually he was taken in by the muddled, well meaning, and not entirely honest Vee Sedge.

Vee did her best to keep her family together. Her son worked nights and during the day often went away, offering no explanation at all; and her dependent mother, was an obsessive letter writer, writing to government ministers and public figures, determined to sort the war out and make the world a better place. The family was always in debt, it was a struggle to find the money to keep the rent collector at bay, and Vee was sure that she could keep an evacuee for less that the payment she would receive for his board and lodgings.

Vee had other plans for making money from the war, and she found that a bright, young boy could be a very useful ally; Noel instinctively helped Vee and he found himself enjoying his new role. The two of them became a team.

That was lovely to watch; two completely different characters, who don’t entirely understand each other but who realise they can help each other and instinctively do just that. It worked so well because those two characters were flawed and so very, very believable, and because Lissa Evans wrote of them with wit, with empathy and without a hint of sentimentality.

The depictions of London during wartime was very well done, and the story touched on interesting aspects of life in wartime, some of which I hadn’t thought about before. It was utterly engaging; I was there, I was involved, I cared.

I wasn’t at all surprised to find out that Donald’s absences had come about because, like his mother, he was scheming to make money from the war. His plans were much more dangerous than hers, and when Noel found himself out of his depth and in serious trouble it was Donald’s fault. Vee wanted to do the right thing, but she knew that there would be a price, and that scared her.

My heart was in my mouth. The danger was very real.

I was so sorry when the book was over.

It spoke so very well about the lengths people will go to survive; about our need for love and support; and about how people can take you by surprise.