January 2, 2015 By Fleur in her World in Book Reports, Classics Club, Fictional, it came from the past and pulled me back there Tags: Stella Benson 16 Comments

Stella Benson was born on 6 January 1892 at Lutwyche Hall, an Elizabethan Mansion in South Shropshire, England, and her aunt was novelist Mary Cholmondeley. Her background was privileged but her health was poor. She became a devoted reader and a regular diarist; she inherited a passionate concern for social issues, and in particular women’s suffrage, from her mother and her aunts.

Wen the First World War came  she worked as a gardener  and she supported poor women in the East End of London who had suddenly found themselves having to earn their own living.

Those experiences provide the foundations for her first novel, published in 1915. 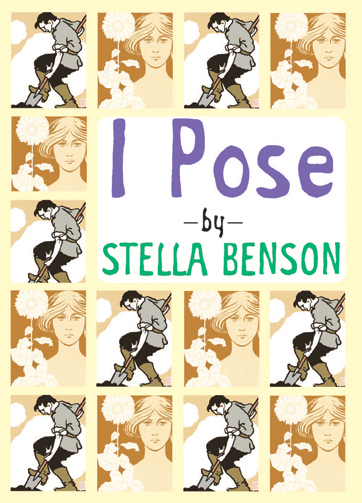 What she builds on those foundations is odd, unexpected, and gloriously creative.

She.tells the story of two characters – a gardener and a suffragette. They are never named, but that really doesn’t matter.

First there is the gardener, a young man with independent means who is proceeding through life by adopting a series of poses that allow him to be exactly who he wants to be and to address those around him in riddles and witticisms.

On the spur of the moment he sets out to try the life of a vagabond.

“I have left everything I have as hostages with fate,” said the gardener. “When I get tired of Paradise, I’ll come back.”

The gardener was concerned when he found the suffragette intended to blow up a church.

‘The gardener, of course, shared the views of all decent men on this subject. One may virtuously destroy life in a good cause, but to destroy property is a heinous crime, whatever its motive..’

They would pose as a married couple and they would proceed in opposing directions.

The narrator intervened from time to time, posing just as much as her creations, and that balanced things beautifully.

‘”I don’t agree with you at all,” said Mrs. Rust, who now made this remark mechanically in any pause in the conversation.’

I could write reams about the plot, but the plot really isn’t the point.

The writing, the style make the story sing.

At the beginning I felt that Stella Bowen was presenting a puppet show; later I felt that she was staging a production at the theatre, but by the end of the story I had been drawn into a very human story. It was a story that explored the relationship between the poses we present to the world and our real concerns in all of its complexity with wit and with such understanding.

I don’t want to – I don’t need to  – pull her book apart to see how it works. I just want to wonder at it, to be impressed that it does!

And now, of course,  I want to read everything else that she ever wrote!