December 9, 2014 By Fleur in her World in Book Reports, Classics Club, Fictional, it came from the past and pulled me back there Tags: William Makepeace Thackeray 28 Comments

I liked the book, enough to keep reading, to want to see the story through to the end. ‘Vanity Fair’, like many big Victorian novels, began life as a serial and so there are lots of plot twists and cliff-hangers, and they helped keep going. Because ‘Vanity Fair’ doesn’t feel like one of ‘my’ books ……

It begins beautifully, with a theatrical manager introducing his puppet show:

“The famous little Becky Puppet has been pronounced to be uncommonly flexible in the joints, and lively on the wire; the Amelia Doll, though it has had a smaller circle of admirers, has yet been carved and dressed with the greatest care by the artist; the Dobbin Figure, though apparently clumsy, yet dances in a very amusing and natural manner; the Little Boys’ Dance has been liked by some; and please to remark the richly dressed figure of the Wicked Nobleman, on which no expense has been spared, and which Old Nick will fetch away at the end of this singular performance …. “

The manager steps back to become a narrator, but he will step forward again often, to commentate the story that he will have his puppets tell. It is  a colourful, wide-ranging, social satire  that he set in what was, for him, the recent past; the period before, during and after the Napoleonic Wars. 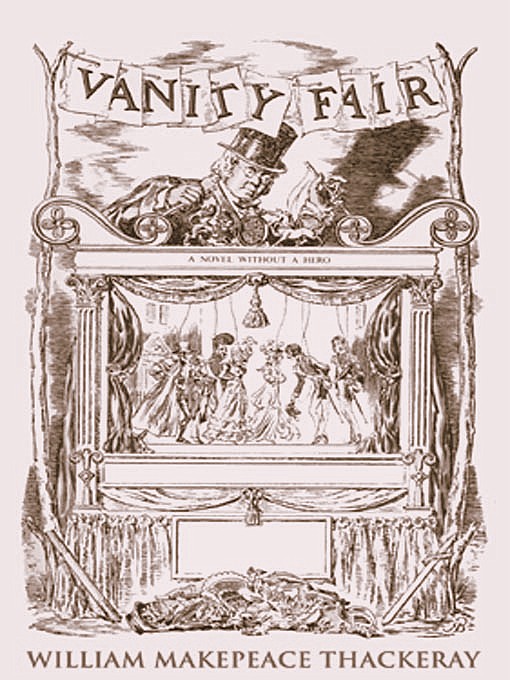 He describes his story as ‘ a novel without a hero’ – and that’s a point that could be debated – but it is indisputable that the story is driven from start to finish by its unforgettable anti-heroine, the bright, ambitious, scheming, social-climbing Becky Sharp.

She was orphaned at a young age, she had to depend on what little charity there was in the world, and she learned to survive. She viewed the world with a clear-eyed and utterly ruthless gaze,  seeing everyone she meets in terms of what she might gain from them, and playing up – being charming, being humble, being or alluring  – whatever was needed to gain what she wanted, to put her foot on the next step of that ladder.

When she left her first position, as a pupil-teacher in an exclusive girls’ school, she didn’t hesitate to speak her mind:

“I have never seen the individual who has dared in my own house to question my authority. I have nourished a viper in my bosom.”

“A viper – a fiddlestick,” said Miss Sharp to the old lady. “You took me because I was useful. There is no question of gratitude between us.”

She didn’t look back, she only ever looked ahead. She was appalling, but she was also inspiring, and she had such charisma.

The only thing that held her back was society. She had influential patrons, she married well, but her low birth would never be forgotten. Becky lived in a world that didn’t value achievement and aspiration, she lived in a world that expected  people to know their place, and stay in it. But of course Becky wasn’t going to accept that, and her schemes and manipulations became grander and grander.

The other characters, drawn in the main from three families who have links with Becky – the Osbornes, the Sedleys, the Crawleys – are pulled through the story by her. At first it sees that they will always be secondary, but they are very well drawn, they are diverse, they are colourful, they have interesting stories of their own. I just wanted to be surprised occasionally, but sadly I don’t think I ever was.

Amelia, whose story is told in parallel with Becky’s, was her opposite and the closest the story has to a heroine. She was kind, she was generous, and she never saw anything bad in anyone. I found her lovely and infuriating in equal measure. And though she was a beloved, favoured child she had a difficult path through life.

A great deal of history plays out as events unfold, but it is only a backdrop; this is a human story. It speaks of the effects of the class system, of wealth and poverty, of marriage, of family life ….

There are times when the story rolls along beautifully, with drama and incident, with shocks and surprises; but there are also times when it is as dull as ditch-water. I particularly remember long chapters in army camps when I so wished that Jonathan Strange might step into this book to move the Napoleonic war along.

But the highs were wonderful, and they made it worth struggling through.

The ending – and what happened after that – was perfect.

“Ah! Vanitas Vanitatum! Which of us is happy in this world? Which of us has his desire? or, having it, is satisfied? – Come, children, let us shut up the box and the puppets, for our play is played out.”

The more I think about the book the more I like it.

I can’t quite say that I love it, but I am glad that I read it.