November 22, 2014 By Fleur in her World in Book Reports, Fictional, it came from the past and pulled me back there Tags: Katharine Susannah Prichard 11 Comments

When I was considering books for Brona’s Australian Reading Week I caught sight Katharine Susannah Prichard’s Goldfields Trilogy caught eye from the top shelf of the Virago bookcase. I have read much praise for the author and those books look wonderful, but it wasn’t the time for me to embark on a new series and, as those books came late in a writing career, I though there might be a good, earlier novel for me to try first.

“Cars and buggies, far away on the dark road, flickered like fireflies, coming into the town, converging round the restless spangle of lights in the paddock beside the river where the circus had camped.

Under starry skies, across the dim palms, gay blare and tinkle of the circus band flew far and wide.

the tents erected during the morning glowed like a crop of luminous toadstools. Smoking flares showed gaily caparisoned horses, fantastically clad riders moving in and out from the dark behind the tents. Crowds of men, women and children from the town and surrounding farms, seethed across the dark paddocks towards them … “

At the centre of the stage is Dan Haxby, proprietor and ring-master. The circus is his life, his world, and his family are all part of it. He loves his family, but he takes it for granted that for them – as for him – the circus means everything. 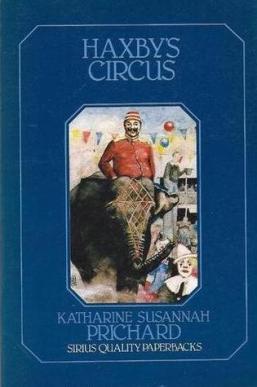 Gina learns to walks again, against the odds, but her back is hunched and she will never be able to do many of the things that she did before. She returns to the circus, partly because it is her home and partly because she has nowhere else to go. There is no place for her but she is determined to make one, to make things better, and to put her life back together.

This is Gina’s story and she is a wonderful character. She has strengths – her determination, her love for her family, her will – and her practical efforts – to make things better; and she has weaknesses – blind-spots, too many things that she cannot see or cannot understand.

She doesn’t understand that, though her life is hard, the only place her mother wants to be as it her father’s side, working hard, giving her life, for the circus.

She doesn’t understand that she is spoiling her talented little sister, Max – maybe to fill a void in her life – and that she cannot protect her from life’s harsh realities.

And she does not believe that she could be loved.

Sometimes she was infuriating, but she was always engaging.

The book follows the course of her life, through good times and bad ties, through an age where the cinema is drawing audiences away from the circus. That makes the plot feel a little uneven, and there were one or two things that stretched credibility. But the story held me, and the writing style suited it beautifully.

The cast of characters was wonderful – Dan was the ultimate showman; the story of his wife, Lotty, was heartbreakingly believable; Max was so clearly what her life and her circumstances had made her; Rocca, the dwarf clown, had such perfect understanding of his own reality, and though his appearance was short his role was pivotal; Paul Bach, tamer of wild beasts, was close to Gina but I feared for her and I was right ….

I wish some of the characters in the background had been filled in a little – Gina’s sister and her husband, and her blur of brothers – though the story was full enough

But drawing of Haxby’s Circus was wonderful from start to finish. This circus story said much about life, family, the consequences of how we choose to live; the later chapters speak so profoundly about ageing, about loss and acceptance.

And then the final twist made me catch my breath ….