November 15, 2014 By Fleur in her World in Book Reports, Factual, it speaks of intrigue and crime, it took me to another time and place, Non-Fiction Adventure Tags: Carol Baxter 8 Comments

On New Year’s Day 1845 a message was sent along the telegraph wires laid beside the railway tracks between Slough and Paddington stations:

“A murder has just been committed at Salt Hill and the suspected murderer was seen to take a first-class ticket for London by the train which left Slough at 7:42 p.m. He is in the garb of a kwaker.”

(The early two-needle telegraph had no letter ‘q’.)

A man was apprehended; a man with an extraordinary story.

John Tawell had been found guilty of fraud, he was transported to a penal colony in Australia; when his fourteen year sentence was done he made his fortune, sent hope for his family, and, some years later, they returned to England. 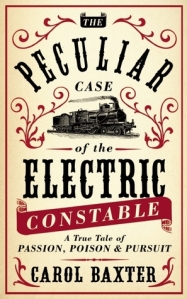 Carol Baxter tells his story, the story of the crime and the investigation, and the story of the trial and conviction.  It reads like a drama-documentary. The level of detail is extraordinary, and the long, long list of sources confirm that this book was built the most detailed, most thorough research.

I learned much about the development of the electric telegraph, early Australian history,  Quakerism, chemistry and forensic medicine. It was fascinating, but once the ‘thrill of the chase’ was over the story settled, it became engaging when it should have compelling.

There was no major fault but there were small things: dialogue that was credible but that no amount of research could have uncovered, a lack of wider and historical context, and maybe a little unevenness in the pacing.

But Carol Baxter writes well, she clearly knows and loves her subject, and she handles the small revelations and the big revelations particularly well

There really was a great deal to hold the interest.

The case against John Tawell was compelling,  but the evidence was circumstantial, and there are many questions that could be asked about the handling of the investigation and the subsequent court case.

There was a confession, at the eleventh hour, but the written document has not survived and so there has to be another question. Did it exist or was it merely reported?

The title of the book and description of the book is a little misleading, and I can understand why some readers have been disappointed.

This is actually a very human story, and its strength is the remarkable history and psychology of John Tawell.

That’s what came through at the end, that’s what had stayed with me, and it made this book well worth reading.