October 28, 2014 By Fleur in her World in 100 Years of Books, Book Reports, Fictional, it came from the past and pulled me back there 17 Comments

One lovely thing about reading old books is the lists of other books you find, sometimes on the back cover and sometimes on the final pages. It was a lovely way of for publishers to show off there wares, and I noticed that whoever had the job of writing those little advertisements in the back of ‘None-Go-By’ by Mrs Alfred Sidgwick was particularly enthusiastic about the books he had to show off.

I was intrigued to see J C Snaith described as a ‘teller of enthralling tales.’ I had never heard of that author, and when I went to look for him I found that he was very obscure, but I found a book titled ‘The Adventurous Lady’ that promised so many things I love – a train, a governess, a country house, a play – and so I had to start reading.

In November 1918, days after the Armistice was signed, two young women were travelling by train to the same small town in the west of England. 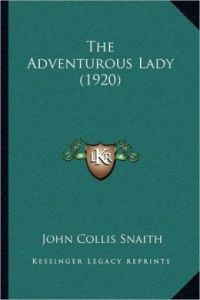 Lady Elfrida Catkin was the youngest daughter of the Marquis of Carabbas, and she was an aspiring actress. That was gave her father the idea sending her to a house party, to take part in a friend’s amateur production, and maybe to find a husband among the distinguished company. Lady Elfrida was unimpressed; the play was terrible and there were lots of things she wanted to do before settling down with a husband. But she couldn’t wiggle out of this particular obligation, and so she was off, with an old family retainer in tow.

Miss Girlie Cass was on her own in the world. She had dreamed of becoming a writer, like Mrs Humphrey Ward, like Mary Cholmondeley, and maybe even like Charlotte Bronte; but her solicitor father’s had died, suddenly and unexpectedly, and so she was on her way to her first job as a governess. Understandably she was nervous, and she was more than a little flustered.

Lady Elfrida had swept down the platform as Miss Cass peered into compartments, struggling to find a seat on a ridiculously crowded train. She saw her, she instinctively instructed the porter to help Miss Cass in her compartment. The porter protested, but Lady Elfrida overruled him, telling him he could come back when he had found Miss Cass the seat she had paid for. He disappeared, never to be seen again.

Once thanks had been offered and accepted the party in the first class compartment settled down for the journey.

Lunch-time came and Miss Pike, Lady Elfrida’s chaperone produced a lovely picnic for the two of them. Miss Cass’s mouth watered, and she realise in her haste she had left her own lunch behind. Again Lady Elfrida came to the rescue, proffering a sandwich and a smile, It might have been a genuine act of kindness, but it was also a chance for her to start a conversation and satisfy her curiosity about the quiet young woman sitting opposite her. She teased out Miss Cass’s story, and a plan began to form in her mind.

Miss Cass would take her place at the house party. It would be an adventure, it would give her lots of material for the novel she wanted to write, and it might just give her a happy. That terrible play ended with a governess marrying a lord, and surely that was a sign. Meanwhile Lady Elfrida – who had seen off lots of governesses – would enjoy playing that role for a while.

It was madness, but Lady Elfrida was so persuasive, and she had plied Miss Cass and Miss Pike with the very good bottle of wine from the picnic hamper. She switched coats and cases, she steered people to the right places, and then it was too late to turn back ….

That was a brilliant beginning: it was beautifully observed, the characters were well drawn, and the story was told with just the right balance of wit and empathy.

Miss Cass was smitten with the lovely clothes she had to wear, with the deepest bath she had ever seen, and with the sheer luxury of it all. But she was terrified that she would do something wrong, or that the deception would be uncovered. That was understandable – she had no money and nowhere to go. She struggled to hold her own in company, and she proved to be a terrible actress.

The other guests took against her – they decided she was stuck-up, a judgement so often made against shy people in error – and the play was a disaster.

Meanwhile, Lady Elfrida was struggling to cope with two unruly children, and she often forgot her place in the household. Governesses were not expected to make sparkling conversation at the dinner table, to have such poise, to answer back ….

It was entertaining, it was credible, and I appreciated that the characters were sustained beautifully.

Each attracted an admirer: an elderly lord was charmed by a quiet, rather old-fashioned young lady, and a young man about to set out on his travels was impressed by a governess who was ready to stand up to his troublesome relations .

But would they still be admirers when they found out that they had been deceived?

What would happen when Lord Carrabas, hearing of the failure of the play, decided to look into what his daughter had been doing?

Disaster seemed inevitable, but it was averted, lessons were learned, and happy endings were dispensed all round.

The story suggested that characters were set, but social mobility was possible. That’s not a bad thing, but I was a little disappointed that Lady Elfrida’s dreams of the stage and Miss Cass’s dreams of life as a writer seemed to have been forgotten.

‘The Adventurous Lady’ was a very readable book, I appreciated lots of lovely details, but it wasn’t really the enthralling tale that I was promised.

I’d suggest that it was a book of its time, nearly a century ago, and it can be safely left there.

There’s sometimes a good reason why you haven’t heard of the books listed in the back of other books.

But there are plenty of lost gems out there, so I’ll still take a chance, from time to time ….