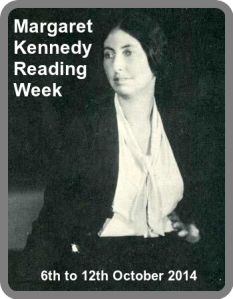 The first thing I must say thank you, to so many of you who banged the drum for Margaret Kennedy Reading Week, who were ready to take a chance on a new author, and who took the time and trouble to write about the books that they read.

It really has been lovely to watch.

All that remains is to look back at what we’ve read.

And to give away a prize ….

Kirsty said: “Whilst ‘The Ladies of Lyndon’ is nicely written on the whole, it does feel rather dated ….”

Jo said: “The book captures I think a snapshot of a period in history and if you were researching this era, then this would be a book which would give you quite an insight.”

Audrey said: “When I read the wonderful opening sentence, I knew I was going to love this book. My second thought was that this could be Jane Austen, writing 100 years later.  But looking back, while there are some Jane-ish echoes here, there’s much more snark and bite.”

Cat said:  “I would call The Ladies of Lyndon a domestic and social comedy. The plot is minimal and it’s the interrelationships, the actions and dialogue between the characters that brings the pre and post-war eras to life. “

Ali said: “I absolutely loved it, at once fully involving myself with the characters, as I became immersed in the world of ‘Sanger’s Circus’. I think Margaret Kennedy might be an author whose work I will have to read much more of.”

Helen said:  “I loved the setting, the characterisation and the elegant, engaging writing style and am looking forward to reading more of Margaret Kennedy’s books. “

GenusRosa said: “The intense bursts of lucid, fresh prose often kept me thinking about what I had just read. As a musician, there were many elements of the novel that resonated with my own perspective.”

Kirsty said: “Kennedy discusses familial relationships and their breakdown throughout the novel ….. Together and Apart, even all these years later, is still an important novel, just as relevant to our society today as it was upon its publication.”

Kaggsy said: “Reading “The Feast” was a hugely enjoyable and rewarding experience and I’m so glad I chose it. In fact, I think it will benefit from a re-read as I was so anxious to reach the conclusion that I’m sure there are many profound little bits I’ve missed.”

Cirtnecce said: “More than anything else, Ms. Kennedy understood both the most noble and the very base instinct of the human heart and her characters brought them forth with force and unerring honesty!”

Elaine said: “Troy Chimneys is an odd and appealing Regency historical novel with a quiet, studious hero who creates a dashing alter-ego as his public persona ….. I really enjoyed this short novel. I have not read anything quite like it.”

I said: “Margaret Kennedy is wonderfully clear-sighted and unsentimental, and not at all judgemental. She just presents that characters and tells the story, and yet I knew that she knew. And I agreed.”

Cirtnecce said: “The plot is wonderful, you are plunged write into the truth of Dorothea Harding’s life right at the start, but in a distinctive narrative style, it takes a while for the readers to actually put the whole jigsaw puzzle together.”

I said: “There were moments when I saw the influence of Thomas Hardy, there was prose that might have been Jane Austen telling a story unlike any of her own; but what makes the story sing is a depth of feeling that belongs entirely to Margaret Kennedy.”

Simon, in Shiny New Books, says: “ Kennedy has created an evocative, moving, and – somehow – transfixing location, and peopled it with fascinating characters.”

I think that’s everyone, but if it isn’t let me know and I’ll put things right.

And so to the winner. The random number generator tells me that:

AUDREY has won a copy of – well, I’m not going to say, because she asked to be surprised, if she should win.

I’ll just say, Audrey, please send me a mailing address via the email in the side bar so that I can send you a lovely Margaret Kennedy novel.

I’ve loved Margaret Kennedy Reading Week, and so  I just have to say thank you again, so much.