September 28, 2014 By Fleur in her World in Book Reports, Classics Club, Fictional, it came from the past and pulled me back there, Virago Modern Classics Tags: Winifred Holtby 8 Comments

‘Anderby World’ was Winifred Holtby’s first novel, written when she was in her early twenties.

She would go on to write finer novels, but this was an excellent start; she wrote of the Yorkshire she knew, understanding the people, the history, the changes wrought by the Great War that she had lived through, and the way that the world was changing still.

The writing has such conviction, and I think it would be fair to say that this is a first novel sowing the seeds of greatness…. 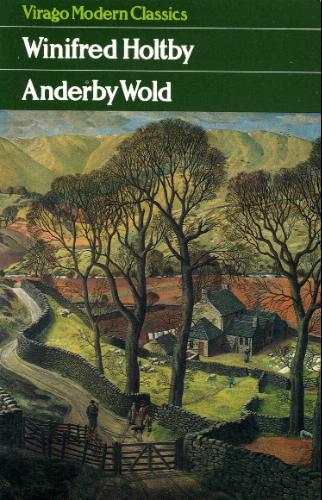 When her parents died Mary Robson married John, her steady, sensible, older cousin, so that she could keep the farm at Anderby Wold. It took them ten years to pay off the mortgage, and by then Mary was in full charge of her life and her world. She managed her farm, her home, and the village of Anderby. She was a strong and capable woman, and she was firm in her opinions.

She held her own in her social circle, but she was disliked by many. Sarah Bannister, John’s elder sister, who had raised him after their parents died, felt that Mary didn’t appreciate what John had done, leaving his own farm to help her save hers. Mr Coast, the village schoolmaster, was bitter that Mary wouldn’t accept his ideas for the school.

That made Mary vulnerable. The dullness of her marriage, her failure to produce a child, made her vulnerable. And, with debt gone and the farm secure, there was a space in her life, room for something more

It was then that she met David Rossitur, a red-haired, fiery, young idealist who preached socialism. She was captivated by his energy and his passion, she was intrigued by what he had to say. She loved their debates, but she was less happy when he began his work in the village. A colleague was summoned from Manchester, a union was formed a union, and soon Mary faced a choice between meeting demands that she felt were wholly unreasonable or having her farm-workers strike at the worst-possible time.

The story explores the conflict between traditional and progressive views wonderfully well; understanding both, and understanding that there is no black and white, that there are only shades of grey.

Above all it is a human story; a story of real, fallible, believable human beings, who all had good, solid reasons for being the people they were and doing the things they did.

Sarah was critical of Mary, but that came from her love for her brother, and when she was needed she would always be on their side. Mr Coast was critical, but he wanted the best for his school and his community. John was cautious and conservative, but he was content with his place in the world and he understood his wife much more than she realised.

Mary had so much potential, she could have done so much. But she only had her position at Anderby, and she so feared losing it …..

Winifred Holtby made this story so engaging, so readable, and I was captivated.

There are contrivances needed to make the story work, and there were moments when I might have wished for a little more subtlety, but the story did work, and I loved seeing the themes and ideas that she would explore in all of her novels threaded through this story so effectively.

It was clear that Winifred Holtby cared, and that she understood.