…. and so I have three lovely projects to tell you about.

For the last three years I have knitted my mother a cardigan for her birthday at the end of November, and she’s loved picking the pattern and the yarn and watching her present grow, but this year, because I nearly lost her in the spring I had to let go of that tradition.

That told me that it was time for the Man of the House to have the classic Aran sweater he’s been wanting for a while.

He knew that he wanted the classic, cream Aran colour, and I gave him a range of pattens to choose from. I showed him Alice Starmore Books, Rowan magazines, and a few others that I’d bookmarked on Ravelry. He said ‘maybe’ to one or two, but in the end he said that what he really wanted was one like the one my mum knitted for my dad ….

When my father died my mother shrank that sweater in the washing machine so the she could wear it. She was very proud of that jumper, and I still have it, draped over the back of her chair. 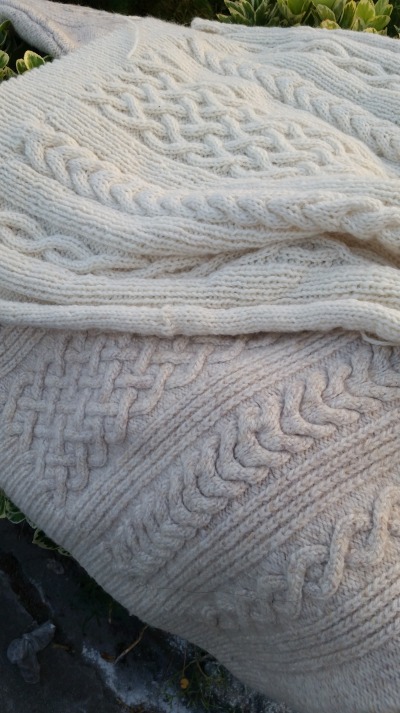 (Mine is above and my mother’s is below.)

Isn’t it strange the way things work out? My mother is delighted that I’m knitting ‘her’ pattern, and though I would have liked something more modern and more intricate, I like the classic elements in this pattern, and I like that the pattern is very intuitive.

One month on, the back is nearly done, and I’m on schedule have a sweater finished for Christmas.

In between times, I’m knitting Heike from Rowan 56 for me. I needed some simple knitting, for odd moments when I didn’t want to get into Aran knitting. This is very simple, but the colour-blocking makes it interesting. I had two colour, in Rowan Scottish Tweed, from a project that never happened, and so I just had to buy the third colour. In Rowan Felted Tweed, which I’ve been wanting to try. 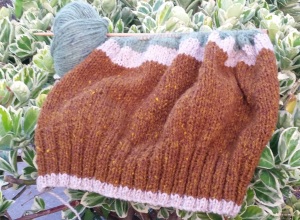 Progress has been rapid – when I was knitting small things with odd balls of wool earlier in the year I forgot how quickly plain sweater pieces in worsted/ aran weight knitted up.

So it’s goodbye to my little knitting resolution bags for now – but not forever.

I wasn’t looking for a third project, but I found one that was irresistable.

I love his work and I’ve wanted to get back into colour-work.

There are three possible projects and four suggested colourways – I’m going for the cushion in the brown colourway. The clues will arrive every ten days, starting 1st October and finishing a week before Christamas, and I need to knit two 7.5″ squares each time. 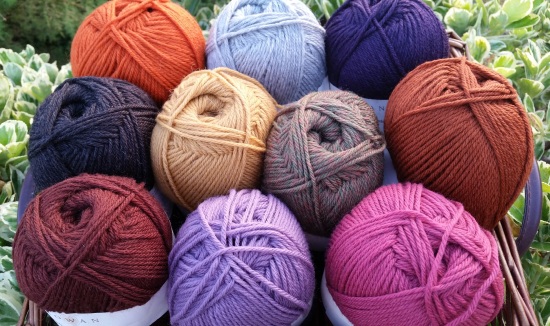 (I’ve no idea how the colours will work together, but I trust Kaffe Fassett!)

I think it can be done, with a little more knitting time as the nights draw in. And maybe a few more audiobooks and a few less paper books.

I’m thinking my mother will enjoy watching the squares mount up, and the finished cushion will make a lovely Christmas present for her.

That all adds up to a lot of knitting, but I’m looking forward to it, because I can’t help feeling that the pieces have fallen into place beautifully.