September 4, 2014 By Fleur in her World in Book Reports, Fictional, it came from the past and pulled me back there, Virago Modern Classics Tags: Pamela Frankau 12 Comments

This is lovely: a quite beautifully written book that speaks so profoundly. I find myself wanting to say so much, and at the same time being almost lost for words.

‘A Wreath for the Enemy’ is a coming of age story, the story of a girl and a boy, whose paths cross one summer on the French Riviera.

Penelope lived there, in the hotel that her father and her step-mother. It was the most bohemian of establishments, catering for artists, performers and eccentrics. Penelope’s life had no rules, she was free to do as she pleased, and she hated it. She longed for a conventional family, and she longed to be free of the chaos that surrounded her. 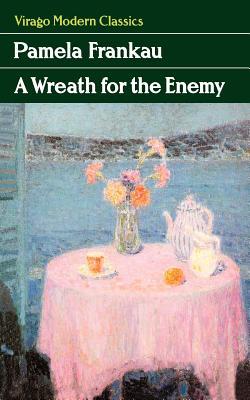 She watched the family staying at the villa set below the hotel – father, mother, son, daughter, baby – and she so wished that she could be one of them. She couldn’t, but she met the children, Don and Eva, and they became friends. Don and Eva were as taken with her world as she was with theirs.

Pamela Frankau captures that relationship, and the emotions of the young people, wonderfully well. Their fascination with a different world, and the tempering of that interest when faced with some of its realities. The resentment of their own reality that turns to defensiveness when it is criticised. All of those complex things.

Naturally both sets of parents are concerned and in the end a death – a quite natural death ends that friendship.

And that is the first of the three acts, told in Penelope’s voice.

Her voice rang true, and I understood exactly how she had become the girl she was: careful, naïve, and not nearly as sophisticated as the books he read and the stream of guests she met made her think she was.

The second act is Don’s. The events of the summer change him, and they make him question things that he had never thought to question before. He judges his parents, he finds them wanting, and his own interests draw him into the circle of an extraordinary man. He is an unconventional man, but he proves to be a wise counsellor.

He was lucky, he was gifted; but another death, another quite natural death shook him.

The third act is told in Penelope’s and in other voices. She and Don had friends in common, and the events that shook his life also touched hers. Penelope would learn lessons, would learn to see the world as an adult, before she and Don meet again.

They had both changed, but they recognised each other, and they both understood the events of the summer that changed their lives so much better.

The third act is not so easy to warm to as the first and second, because it moves between very different characters, but it is so profound. And it speaks so clearly about life, about death, about learning and growing, about penitence and forgiveness ….

Every voice rings trues, every character is beautifully realised, and every word is utterly right and utterly believable. ‘A Wreath for the Enemy’ is not a comfortable story, few of the characters are likeable, but it is – they are – fascinating.

The dialogue is pitch perfect, there’s just enough wit, and the themes and ideas that are threaded through the story work so well.

I really couldn’t have predicted the way the it played out, but it was so thought-provoking and so right.

The only thing that stops me from saying that this book is perfect is the structure. The shifting voices, the overlapping stories, worked wonderfully well, and I liked the more linear story of ‘The Willow Cabin’ a little more.

So ‘A Wreath for the Enemy’ is one small step away from perfection. One very small step. The quality of the writing, the depth of the story, the insight of the author, make this book something very special.

I’m so sorry that none of Pamela Frankau’s work is in print now, but I plan to track down and read as many of her books as I can.