August 28, 2014 By Fleur in her World in Book Reports, Fictional, it has intrigue, mystery and suspense, it speaks of the here and now Tags: Kate Rhodes 16 Comments

Over the course of just three novels Kate Rhodes has grown into a top-flight crime writer.

She creates characters, situations, stories that are utterly, sometimes horribly believable, and she writes so very well that it is impossible not to be pulled in and held from the first page of the story to the last. 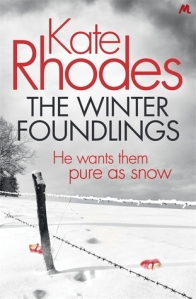 Dr Alice Quentin is a Forensic Psychologist at Guys Hospital in London, but as the story opens she is beginning a six month secondment to Northwood high security hospital, looking in to the care and mental health treatment of some of Britain’s most damaged, most dangerous. criminals.

That was an interesting change, allowing the ongoing story to move into the background, and allowing Alice to be seen clearly in the foreground as capable and compassionate professional woman.

DCI Don Burns contacted Alice, asking that she interview one of Northwood’s patients. Louis Kinsella was Britain’s most prolific, most terrible, serial murderer of children; and there had been more murderers bearing his hallmarks.

Louis Kinsella had been a headmaster, a charity trustee, a pillar of the community. Now he rarely spoke, though he would occasionally deign to communicate by handwritten note, and he had driven one therapist who had worked with hom to a breakdown. He wrote Alice a note, and she was sure that he knew, that he may have been controlling, the recent murders.

He had no contact with the outside world, and so Alice believed that he must have been using, manipulating, somebody from the hospital staff who came into contact with him. But who ….

Alice had wanted a break from her London life and from her work with the police, but she knew that she had to go back. The psychologist attached to the case, Professor Alan Nash, didn’t like that. He had friends in high places, he wanted all of the glory, and he did everything to undermine her. There had been significant changes in DCI Burns’ team since Alice last worked with them too.

Louis Kinsella had been a trustee of The Foundling Museum, and Alice was sure that was significant. She just couldn’t work out how ….

This story is clearly underpinned by detailed research. The practical arrangements in the high-security hospital seemed credible; the different approaches of the staff to their work, the ways they lived and the ways that they coped rang true. That was fascinating.

And I loved learning about The Foundlings Hospital. Kate Rhodes teaches me something new about London with every book, and it is clear that she loves that city that she brings to life on the page.

Every element of the plot worked. Alice’s relationships with her mother, her brother and her best fried were touched on; things evolved a little, and shed more light on her character, without the slightest hint of contrivance. Professor Alan Nash reminded me of a certain colleague, and I definitely understood his psychology. Alice’s interviews with Louis Kinsella were chilling, and, though I was willing her on, I feared for her. DCI Burns’ new number two added interest, and I’d love to see her working with Alice again. The interludes with the child who was snatched and held by the killer were very well done, with great subtlety and great clarity.

And there are more things – some many details, all so very well drawn – but I can’t list everything.

They all came together to make a compelling and utterly credible story. The suspense was sustained beautifully, and suspicion fell in many different directions. The writing was so very clever, and I changed my mind so many times.

Just before the end there was a striking, a quite unexpected twist. And the resolution was unexpected, but entirely right.

I shall be surprised if I read a better piece of contemporary crime fiction this year. And I am already anxious to read Kate Rhodes’ next book.