August 26, 2014 By Fleur in her World in Book Reports Tags: Anna Freeman 7 Comments

“It just seemed so odd – and brilliant – that women were boxing on stage at the same time that other ladies were fanning themselves and embroidering.”

Those words – from Horrible Histories – inspired Anna Freeman to write a colourful and compelling debut novel.

It’s set in Bristol in 1799, and it moves between backstreets, brothels and grand houses of the city, as it weaves an elaborate tale of fighters, entrepreneurs, gamblers and spectators, all caught up in the world of boxing. 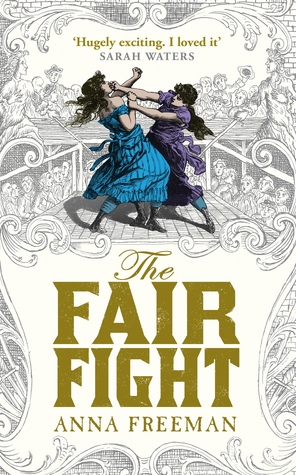 At the centre of the story are two very different women – Ruth and Charlotte.

Ruth Webber grew up in ‘the Convent’, a brothel run first by her mother and later by her sister Dora. There was no work there for Ruth – who was too plain, too ungainly – but Ruth had spirit and she was always going to stand up for herself. Her sister’s regular client, Grenville Dryer, saw a sisterly scuffle between Dora and Ruth. He saw that Ruth had potential as a prize fighter in the fashionable world of women’s boxing, and that he was in the perfect position to make money from her.

He was right, and Ruth’s success brought respect, admirers, love; things that she had never thought would be hers.

Until something went wrong, and Mr Dyer turned his attention elsewhere …..

Charlotte grew up in a grand house, but she was horribly scarred by the smallpox that took all her family, save the brother who was away at school. Sadly that brother, Perry, who inherited the family home and fortune, grew up into a cruel drunk, who thought that tormenting his sister was wonderful sport. Every little thing she had, every dream she dreamed, he took away.

And he gave his sister away, when her lost a bet with Granville Dyer …..

The stories of the two women – which eventually crossed – were set against a third narrative.

George was a friend of Perry and Granville, who had eased his way into Perry’s life, as his steward and his lover. But George wanted more that that ….

The characters are vividly drawn and their stories are colourful. The fights are compelling – and painful – reading.

But, as a whole, the book felt overblown, with too much detail, too many drawn-out scenes, and too many moments that stretched credibility a little too far.

It’s a good book, a very readable book, but I can’t help feeling that there was a better novel that might have been inspired by those words from ‘Horrible Histories’ ….