August 22, 2014 By Fleur in her World in Catching Memories and Seeing Stars 16 Comments

This is an idea that’s been growing for a while.

It started when I read ‘A Hundred Pieces of Me’ by Lucy Dillon. When Gina and her husband split up she moved to a lovely new flat, and she vowed to clear out all of the ‘things’ that she had acquired over the years and live a simpler life.

Author Jane Johnson brought the idea to the front of my mind when I heard her speak at the Penzance Literary Festival last month. She suggested that there were two kinds of people: the kind who want to seek out the exotic and the kind who want to gather the familiar around them. she’s the former and I’m the latter. but a thought came into my head. Those of us who gather the familiar also need the space to gaze at the stars and dream.

So there will be occasional posts – some short and some long – some bookish and some not – about the things I’m letting go, the things I’m sending out into the world to find new homes.

This is the first. 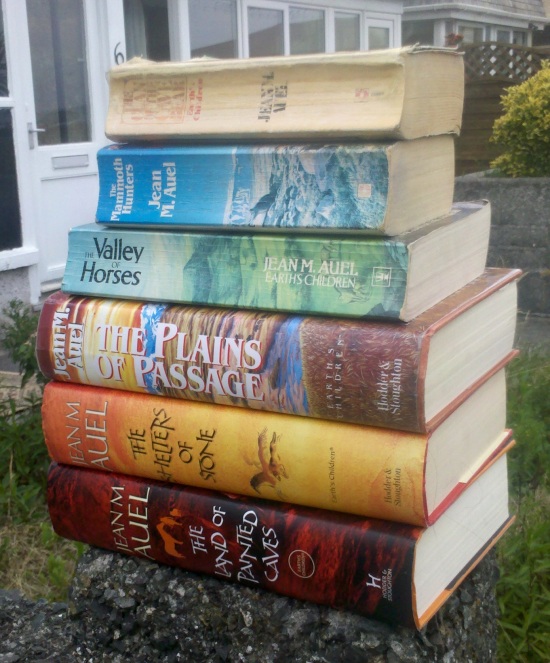 I was still at school when my mother acquired and read a paperback copy of ‘The Clan of the Cave Bear’. She loved it, and when my mother loved a book she would always encourage everyone she knew who she thought might like it to read the book too, happily offering up her own copy.

We lost a lot of good books over the years that way, but I have to love my mother’s generosity of spirit in that and other ways. She would give anything to anyone who she thought might need it.

My father read the book too and then it came to me. It took me a few attempts, but eventually I read it from start to finish. I liked it, though not quite as much as my mother had.

She read it again, and the next few books in the series made it home in paperback editions.

My father bought my mother the fourth book – ‘The Plains of Passage’ – in hardback, because she continued to love Ayla and she was impatient to know how her story played out.

I was living in London in 1992, and usually when I rang home I spoke most to my mother. She and my brother were on the chatty, outgoing wing of my family; my father and I were on the quiet, introverted wing. But one day in early December my father got to the phone first. I remember him saying that he hoped the new Auel book would be out for Christmas so that he could get it for my mother.

But that conversation stuck in my mind. Because it was the last telephone conversation we had before my father – who was never ever ill – was diagnosed with a virulent form of cancer that killed him just a few weeks after that diagnosis.

Because I remembered that conversation I made a mental note to get my mother that book immediately it was published.

It was years later, but I did get the book, and I did explain why.

We both read it, and we were both disappointed, agreeing that the story wasn’t progressing, that there was too much repetition, too much unnecessary detail, and that there was a heck of a lot left to cover in the sixth and final book of the author’s planned series.

Many more years would pass before the next and final book – ‘The Land of Painted Caves’ – was published. Advance word wasn’t good. My mother had become mentally frail – we didn’t use the dementia word then – I still don’t and I don’t think I ever will – but she was in the early stages – and she was reading very little. But I thought that the this book would strke a chord.

It didn’t. She hadn’t read a novel for a while before that and she hasn’t finished one since. She still loves the idea of books, she still picks them up with the idea of reading them, she still wantes to know about the books I read, but somewhere along the way she lost something of what it takes to read a novel.

I realised that I didn’t want to read ‘The Land of Painted Caves’ either. Because as I read more about the book I came to realise that the author’s vision for her series of books didn’t match mine.

And I think – actually I think I can say I know – that it wouldn’t have matched my mother’s.

So the books can go and the memories can stay.

The last novel that my mother read was ‘Little Boy Lost’ by Marghanita Laski. That feels right, because she mentioned, when she saw my Persephone copy, that her mother had loved Marghanita Laski. And so I gave her the book – which I loved too. She loved it, and she shared my copy with a number of friends before it finally found its way home to my Persephone bookcase ….