August 18, 2014 By Fleur in her World in 100 Years of Books, Book Reports, Fictional, it came from the past and pulled me back there, it has intrigue, mystery and suspense Tags: Fergus Hume 11 Comments

Fergus Hume was born in England in 1832. His family emigrated to Australia, where he became a barrister and aspired to be a writer. His early efforts were met with complete disinterest, and so, unwilling to admit defeat, he asked a local bookseller what type of book was most popular. The answer was detective novels, and so Hume bought and studied all of the works of the popular crime writer Emile Gaboriau that the bookstore had to offer.

The result was ‘The Mystery of a Hansom Cab’, the first of some 130 books that the author would publish between 1886 and his death in 1932. That first book though was his only success. And it was a huge success; quite probably the best-selling detective story of the eighteenth century.

Other books of the period may have stood the test of time better, may speak for their times more eloquently; other authors may have left a greater body of work; but this book has much to hold the interest. 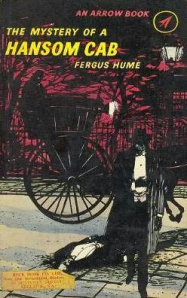 The book opens with a newspaper account of a murder. A drunken man had been put into a cab by another man, who instructed the driver to take him home. And when the driver stopped to ask his fare for directions not long afterwards, his passenger was dead, suffocated with a chloroform soaked handkerchief bearing the initials OW. There was nothing else that gave any clue to the dead man’s identity, and nothing at all to indicate who the man who had put him into the cab – the man who must surely be his murderer – might be.

Mr Gorby, the police detective at the head of the investigation, was very capable, and he was quick to establish that the dead man was Oliver Whyte, a newcomer to Melbourne society.

It was interesting that Whyte had been courting Madge Frettlby, who was the only child of Mark Frettlby, one of the richest men in the city. Madge was in love with Brian Fitzgerald, an Irishman who had come to Melbourne to make his fortune; her father knew that, and yet he was encouraging Whyte’s suit.

Fitzgerald pleaded innocence, but herefused to provide an alibi for the time of the murder. He had one, but he would not use it because he knew that to do so would cause irreparable damage.

It was fortunate that his lawyer, Mr Calton believed him, and prepared to investigate. Another police detective, Mr Kilslip, was convinced that his old rival, Mr Gorby, had got things wrong; and so the two men set out to uncover the truth.

They came to understand why Fitzgerald wanted to keep a secret that he wished he had never been told, a terrible secret, with roots in England and Australia, involving some of the highest and some of the lowest of Melbourne society …..

The plot rattled along nicely, from crime, to investigation, to trial, to aftermath. And as it did that it shifted from crime story to sensation story. Hume did better with the former than the latter, and though I enjoyed most of the journey in the end I could see how things were going to play out and ready for the journey to be over.

But I had found much to appreciate along the way:

I admired the professionalism of the police and lawyers, and I was pleased that they all proved to be capable. I liked that there was some moral ambiguity in the way the story played out. And I found it easy to believe in these people, to believe in their world, and to enjoy spending time there.

A hint of misogyny was disappointing, but Madge did develop into a credible heroine – albeit a woman of her time – after a shaky start, and this was a story about plot much more than characters. The characters did their job but no more.

The very best thing though was the wealth of literary references that peppered the story, the many times when the characters mentioned something they’d read about: I spotted Gaboriau, De Quincy, Zola, Braddon, and I suspect that there were others that I didn’t recognise. Sometimes it felt a little contrived but it was lovely, and I loved the author’s generosity of spirit.

The authors I didn’t see mentioned but whose influence I was sure I saw were Charles Dickens – in the slums – and Wilkie Collins – in the melodrama.

Fergus Hume is nowhere near their class, but he has left the world a rather nice period entertainment, pitched at a very interesting point in the evolution of crime fiction.