I’m sorry to have disappeared, but I’ve not been entirely well – it’s been nothing too serious, but it’s been leaving me too tired spend much time with the computer, or even to face reading very much, at the end of the day.

I’ve just been doing a little bit of knitting and browsing back issues of the Rowan Knitting and Crochet Magazine.

And I’ve crossed the finishing line of this year’s knitting resolution. I made up a dozen bags of single skeins and leftover yarn and I vowed to use at least half of them before the end of the year.

I now have six and a half bags of yarn used!

I bought two skeins in a lovely shade of blue with a shawl in mind. I changed my mind about the pattern, and so I put the yarn to one side and waited for the right idea to come along.

It’s a free pattern, it’s hugely popular – at the time of writing there are  21, 604 of them on Ravelry, and it’s more of a scarf/wrap than a shawl, and definitely the sort of thing I would wear.

I didn’t have quite enough yarn, but the pattern is simple to adjust – I did five repeats of the increase rows instead of seven, so I lost some width but I kept the length.

It’s a very clever pattern,  much easier than it looks or reads, and once I caught on to the logic I hardly had to look at the instructions at all.

The only two things I’d say to someone thinking of knitting one are:

My Clapotis  grew when it came off the needles, and blocking really paid dividends. 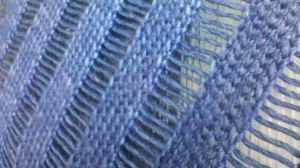 I’d definitely knit another, in a different colour and weight, one day ….

I have an entrelac scarf in progress, and I’d like to use up a little more of my project yarn before the end of the year.

But I’m working on a much bigger knitting project now, and because it’s rather special I’ll write about it …. one day soon ….