August 12, 2014 By Fleur in her World in 100 Years of Books, Book Reports, Fictional, it came from the past and pulled me back there, Virago Modern Classics Tags: Henry Handel Richardson 12 Comments

I don’t know a great deal about Ethel Richardson – who adopted a male pseudonym when she wrote – but I do know that this story, the story of an Australian girl sent to boarding school, is said to be autobiographical, and, if that is the case, I suspect that I would like her very much.

The book dates from 1910, but the story that it tells could easily have happened years earlier or years later.

I loved twelve- year old Laura Rambotham. At home she was a benevolent queen, ruling over her younger siblings, leading them in wonderful games, enchanting them with lovely stories; while her widowed mother worked had as a needlewoman to support her children, and give them the education that they needed to get on in the world,

Of course her mother sent Laura to school, of course Laura was not happy about it, and of course neither could quite see the other’s point of view. 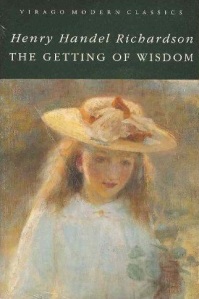 Miss Richardson began her story beautifully, illuminating her characters and their situations with both clarity and subtlety.

I had high hopes for the school story that was to come.

Laura struggled to fit in with her school-mate. They were from the town, and she was from a rural backwater. They were from wealthy families, she was the daughter of a widow with aspirations …. but Laura was set apart by more that that.

She was artistic she was creative. She couldn’t understand that no one shared her appreciation of the writing of Sir Walter Scott, that no one appreciated the descriptions of the English countryside that she had to share. And nobody could really explain to her satisfaction why it was necessary to be able to be able to pinpoint English towns on a map, or to learn the foreign policy of Oliver Cromwell.

And Laura never really learned to compromise, to learn from her mistakes, to do what she needed to do to get by.

She did try to fit in, and often she did, but there were slips. She lost standing when it became known that her mother had to work to support her family. She lavishly embroidered her account of a day out to make a good story, but when the truth came out she was accused of deception and sent to Coventry.

But I had to love Laura. Her letter’s home were a riot. I loved that she delighted the invitations to tea that the other girls dreaded, because it gave her a chance to examine new bookshelves, and that made the fear of being called on to recite or perform fade into insignificance. I loved her joy when an older girl look her under her wing; and her outrage when she found that she had a young man.

Miss Richardson brought the school, and a wonderful cast of girls around Laura to life. It was very easy to believe in the time and the place and the story.

There was just one wrong note at the very end of the story. Laura did something I wished she hadn’t, she wasn’t called to account for it, and she should have been. Maybe it was something she would have to live with, maybe there was to have been another story. But there wasn’t.

This story ends as Laura leaves school, still not sure what her future might be, what it could be, what she wants it to be.

It makes the point quite clearly that education offered nothing to the creative and the artistic.

But it lacked structure – it was difficult to know how much time was passing – and it lacked a sense of purpose. There was no real journey, for Laura, no real lesson learned.

Maybe that was the point ….

Certainly this was a very fine school story, and an engaging and believable tale of one girl’s life at school.