Do you remember your first step into the world of proper, grown-up work?

Joanna Rakoff does. She landed one of those jobs that are so very desirable that they can be appallingly paid; she became an assistant at a long-established, highly prestigious New York literary agency. This book is a memoir of the time she spend there.

It’s simply, elegantly and coolly written, and it catches that very particular stage of life beautifully.

Joanna had parted company with the college sweetheart who everyone – herself included – had expected her to marry, and  set up home with Don – who she had to support because he couldn’t work and write his novel. The signs weren’t good, and neither was the kind of flat that their joint budget could afford. 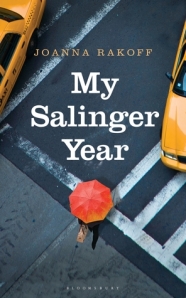 Joanna’s adjustment to post-student life  – dealing with of debt, having to pay the bills, learning to live with one other person in a very small space, watching friends moving in different direction –  is set against her first steps into the world of publishing.

Her new employer – ‘The Agency’ – seemed untouched by the passage of time. Joanna found that she was to spend her days typing – on an old-fashioned type-writer – from a Dictaphone that she had to learn to work with a foot-pedal. There was not one single computer, no fax machine.Theagency was out of step with the world.

Joanna worked for an agent who was a formidable lady of very few words. She had lost many assistants  but Joanna hung on, even though her dreams of reading manuscripts and meeting authors had been dashed, because she needed her small salary to keep her head above water.

I felt for her, but it was lovely to have a glimpse of the workings of The Agency.

The Agency – and Joanna’s boss – were allowed to be arrogant because they had a very, very famous client.

When she was given very particular instructions about how to deal with Jerry – never to call him, never to forward mail, never give out any information, never to approach him, never engage him in conversation – it took a while to realise who Jerry was.

He was J D Salinger.

Joanna had no problem with that because, though she knew his name, she had never read his books.

And that might be why, in time, she was given the job of sending out the standard replies to the letters to the author that arrived every day. At first she did just that, but she was curious about who these people were and why they wrote. She began to read the letters, and she began to respond to what they wrote. It was understandable, it was fascinating to see who wrote and why they wrote, but I worried that there could be consequences ….

One consequence was that Joanna stated to read Salinger’s books, and started to understand. There was a lovely bookishness about this book from the start and that made this aspect of her story even richer.

And so this became an account of lessons in life, in work, and in literature.

The man himself made a few appearances – on the phone, and once he even set foot in the office.

There’s a little less Salinger than the title suggests. That didn’t bother me, because I’m not a devotee, and because Joanna’s experience helped me to understand why so many are. I’m sure those who are will appreciate the glimpses they get, and knowing the nature of the man wouldn’t expect – or maybe even want – too much more.

Eventually Joanna is given more responsibility, and she discovers that there is far more to The  Agency and the people who work there  than she realised. But she walks away when a new path opens up for her ….

It was lovely to read of the time – a little over a year – that Joanna spent at the agency; and  I could see that she appreciated the experiences she had and the things that those experiences taught her, because she wrote about it so very thoughtfully and engagingly.