…. there often is, but it’s a long time since I’ve found so many interesting titles in the course of just a few days.

On Saturday morning I spotted a ‘3 for £1’ sale at a charity shop in town. I’ve not had much luck with those sales lately, but of course I have to look, and this time my luck was in. 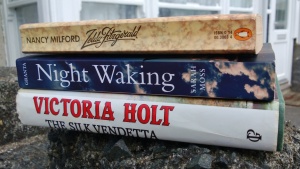 Nancy Milford‘s biography of Zelda Fitzgerald has been on my wishlist for ages, and so I pounced as soon as I spotted.

I was very taken with Sarah Moss‘s first novel – Cold Earth – and I’ve been wanting to read her second, and so when I spotted a copy of Night Waking I picked that up too.

And then I needed a third. There was nothing unmissable but I spotted a book by Victoria Holt that I didn’t know – The Silk Vendetta – I liked the look of it and so it became my number three.

There is a lovely café-bookshop a couple of hundred yards from my mother’s nursing home, and I hadn’t visited it in the nine months I’ve been visiting her. That was because I had Briar with me, but I haven’t taken her since my mother was ill, and became so much more frail than she had been. I would if she asked, but she hasn’t …. and that meant I could look in the bookshop.

I have loved Daphne Du Maurier‘s writing from a very young age; I read every book the library could offer and, later on, I built a collection of my own, but I never came across a copy of The Du Mauriers before. I knew that it was a history of the family in the 19th century, but I hadn’t realised that it was written as a novel. I was smitten from the first page …..

Tea With Mr Rochester by Frances Towers is already in my Persephone collection, and it is a lovely collection of stories. But it holds ten stories – four less than the original edition. I don’t know why, I don’t know whose decision it was, but I remember finding out and being horribly disappointed that I had left a Penguin copy behind in the Oxfam shop a few years ago.

I took a couple of extra days off work after Monday’s bank holiday – one for a jaunt and one to catch up with things around the house – and today was the day for the jaunt!

We try to visit St Ives once a year, to look around the town, to visit the galleries, and to investigate some different bookshops.

I didn’t expect much from the first charity shop we visited. There was a very small selection of books, but I spotted the name of a favourite author

The Landlord’s Daughter and The Room Upstairs both date from the late sixties. The reviews seem to be very mixed, but I love Monica Dickens‘s writing and so, of course, I will give them the benefit of the doubt.

The Oxfam Shop has been a happy hunting ground in the past, and it was again today. 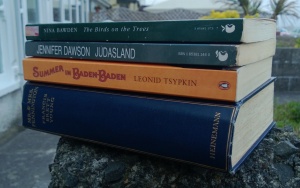 The Birds in the Trees by Nina Bawden fills a gap in my Virago Modern Classics collection. I loved her books for children – especially ‘Carrie’s War’ but I still haven’t read any of her adult novels. I really must.

Judasland by Jennifer Dawson also comes dressed in Virago green, but it was published as a new novel in 1991, not as a modern classic. I’ve read one of her books – The Upstairs People –  I love her style and I have a feeling  that this comedy, set in academia, could be rather special.

Summer in Baden-Baden is Leonard Tyspkin‘s homage to Dostoevsky and, because Russian novels are calling to me, because it’s a train book, I decided to pick it up.

And, best of all, I found a book by Francis Brett Young. I love his writing, and I love that Mr and Mrs Pennington is the story of the first year of a marriage in the 1920s.

Now I just need to magic up some more shelf space ….