March 15, 2014 By Fleur in her World in Book Reports, Fictional, it has intrigue, mystery and suspense, it holds stories of the past, it moves between the present and the past Tags: Diane Setterfield 25 Comments

I read The Thirteenth Tale such a long time ago, back when it was a brand new book. I loved it, I read it quickly, and when I had to take it back to the library I bought a copy to keep. I had to, and I sat it on a shelf to wait for the particular someday when it would be the right time to read it again to come along.

It was still there when a BBC film came along towards the end of last year. I liked it, I thought that it was as good as it could be given the constrained running time, but it was just pulled fragments out of my memory, and I remembered that there was so much more.

And so it seemed that someday had come.

But I didn’t read, I listened instead, to a wonderful reading by Jenny Agutter. That made perfect sense, for a book that is about the magic of stories, storytelling, stories within stories, stories about stories ….. and it pulled so many more memories out of that particular corner of my mind where books live.

“There is something about words. In expert hands, manipulated deftly, they take you prisoner. Wind themselves around your limbs like spider silk, and when you are so enthralled you cannot move, they pierce your skin, enter your blood, numb your thoughts. Inside you they work their magic.”

‘The Thirteeneth Tale’  is a book  that draws upon a wealth of others to make a richly embroidered story of its own.

…. and you are on the way to understanding.

‘The Thirteenth Tale’ isn’t the perfect book. It’s a little uneven, its a little too implausible, and it is a little too full of influences for there to be much space left for anything truly original. But I loved it anyway.

The story began with Margaret Lea,  who worked in her father’s antiquarian bookshop and aspired to writing literary biography, receiving a hand-written letter from an England’s most famous novelist. She was dying, and she wanted Margaret to write her biography. 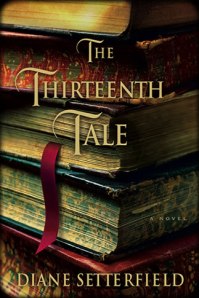 Vida Winter had always evaded questions about her past, by spinning a different story every time she was asked, and she had succeeded in keeping the secrets of her early life hidden. Margaret wondered why she wanted to talk, whether she would tell her the truth, and why she had chosen her when she could have had anyone she wanted.

She had never read any of Vida Winter’s books, but when she picked up her father’s rare copy of ‘Thirteen Tales of Change and Desperation’ she was captivated. And she was curious. Why were there only twelve stories? Why were the final pages of the book blank? And where was the thirteenth tale?

It was a story of a troubled family with dark secrets, of a crumbling manor house in the middle of an declining estate, of children growing up wild, and of the dreadful consequences of all of that.

It was a wonderful gothic tale, wonderfully imagined, beautifully described, and quite gloriously told.

Margaret was fascinated, and so was I. It was a wrench every time I was pulled out of that story and back into the room where the story was being told.

But the two contrasting narratives worked together very well, and letters and diaries added more layers to the story

Margaret questioned the truth of the story she was told. She searched for proof, and in doing so she had to come to terms with her own past, and tell her own story.

“Everybody has a story. It’s like families. You might not know who they are, might have lost them, but they exist all the same. You might drift apart or you might turn your back on them, but you can’t say you haven’t got them. Same goes for stories.

I was rather less taken with Margaret’s story than I was with Miss Winter’s, but I understood that it had to play out as it did.

I loved the themes that were threaded through the two stories – identity, loss, adoption, reconciliation – and most of all I loved the bookishness, and the understanding the importance of stories that underpinned everything.

I have no more words, just two more quotations to cherish:

“All morning I struggled with the sensation of stray wisps of one world seeping through the cracks of another. Do you know the feeling when you start reading a new book before the membrane of the last one has had time to close behind you? You leave the previous book with ideas and themes — characters even — caught in the fibres of your clothes, and when you open the new book, they are still with you.”

“My gripe is not with lovers of the truth but with the truth itself. What succor, what consolation is there in the truth, compared to a story? What good is truth, at midnight, in the dark, when the wind is roaring like a bear in the chimney? When the lightning strikes shadows on the bedroom wall and the rain taps at the window with its long fingernails? No. When fear and cold make a statue of you in your bed, don’t expect hard-boned and fleshless truth to come running to your aid. What you need are the plump comforts of a story. The soothing, rocking safety of a lie.”