March 4, 2014 By Fleur in her World in Book Reports, Factual, it speaks of writers and writing Tags: Samantha Ellis 7 Comments

I was smitten as soon as I saw the title, but when I saw the cover ….. Well, a pile of books is always a good thing and this one was close to perfect. Eight books, and I could tell you about each one, and of memories that each one held for me. 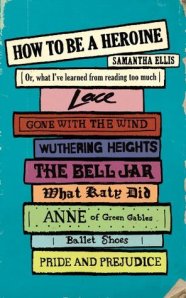 But this is Samantha Ellis’s story, filtered through the stories of the heroines she met in the books she read, and her musings on how they left their mark on her when they first met and when they met again as this book took shape.

I learned that she was a playwright, the child of a family that had come together from Jewish and Iraqi background, a young woman who had not quite followed the path set out for her and had taken some time to find her own. She told that story with with, with just the right balance of self-awareness and self-deprecation, but really it was the books that were the thing.

I met a woman and though we didn’t have too much on common we bonded over books. We agreed about many – though not all – of them, she made me see a few books and a few of their heroines in a different light, and I wondered if I might have done the same if I could have only spoken back to this book. Oh the dialogue we might have had!

This is a long way from literary criticism. It’s talking about books to other readers, those readers who respond emotionally to book, form relationships with character, want to go and live in different worlds, and want other people to understand that. It’s conversational, it’s passionate, it’s funny, and it has a great line in one-liners.

“I can’t quite believe that I was so keen on a story about a mermaid who gives up her voice for legs to get a man.”

That was ‘The Little Mermaid’ and after that we moved swiftly on to Jo March and Anne Shirley; love for the heroines but rather less for some of the worlds they were placed in and the paths they were sent along helped me to clarify why I wasn’t as drawn to re-read certain childhood favourites as much as I thought I should be.

and when it came to the latter I think that maybe we did.  far more than I can mention here. But I must mention some.

So many wonderful books and so may lovely heroines, to remember, to re-consider, and maybe to pull off the shelf to re-read.

Chapters about Franny and Zooey and The Bell Jar nearly lost me, because they were books that didn’t speak to me, but I was pulled back by books that may not be great literature but do have something to say – Lace and the Valley of the Dolls! Swiftly followed by Flora Poste and Scherezade. That was where the book started to feel a tiny bit forced, as if the ‘right books’ rather than the ‘favourite books’ were coming off the shelf.

And so this isn’t the perfect book about books – there were times before that when I couldn’t help feeling that two much meaning was being squeezed from certain heroine or a certain book.