February 25, 2014 By Fleur in her World in 100 Years of Books, Book Reports, Fictional, it came from the past and pulled me back there Tags: Ada Leverson 15 Comments

In this – her debut novel, published in 1907 – she shines a light on wealthy, upper class London society, following one particular family over the course of a long, hot summer.

There are two sisters, one married and one not. 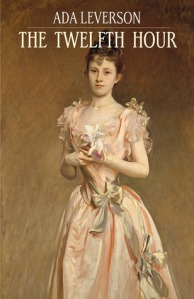 Felicity was delighted to be married to Lord Chetwode, and she was sure that their marriage would be happy and successful. But she barely saw him. Because he loved horse racing, he collected antiques, and he travelled here, there and everywhere in pursuit of his interests. It wasn’t that he didn’t care, he was simply oblivious to the fact that his wife had less to occupy her and wanted to spend time with him.

Her sister Sylvia was of an age to be married, and her father was steering her towards Mr. Ridokanaki, a wealthy Greek financier. Sylvia didn’t care for him at all; she was in love with her father’s secretary, and he with her. She knew that her father would not approve. He wasn’t an unkind man, he wanted her to be happy, but he couldn’t quite understand that others didn’t see the world in exactly the same way that he did.

Their brother Savile, home from school for the holidays, saw everything quite clearly and was quite sure that he could sort everything out. But he was distracted by his love of the opera star he loved from a distance, and by the need to fend off an admirer who was rather younger and rather closer to home.

I couldn’t call it a plot as such, but it was lovely to watch what happened over the course of a summer season.

There are lovely details and moments. Sylvia sent bouquets from her unwanted admirer to the housekeeper’s room; Felicity and her friend Vera were caught up in a desperate social whirl; and Mr. Ridokanaki’s response when he found that his beloved’s affections were engaged elsewhere was wonderfully unexpected.

There were no heroes and no villains, just real, fallible, foolish human beings. In the hands of a lesser writer this might have been a bold, brash work, by Ada Leverson wrote beautifully and understood the importance of subtlety. The Twelfth Hour is above all a human story.

I loved Felicity, and I felt for her. I felt for Sylvia too, though her lack of concern for the feelings of others bothered me at times. But I think I could make allowances, given that she was so young and so in love. And Savile, well he made me wonder if the young Angela Thirkell read Ada Leverson, because he was the sort of young man Tony Moreland might have matured into.

And I really must mention Aunt William; she was a supporting character, but she was the most marvellous comic creation.

Ada Leverson wrote with such wit and such humour; she laughed at her characters, their foibles, their situations, and it was lovely because it was the laughter of a friend. I never doubted that she knew them well, that she understood them completely, and that she cared about what happened to them.

I never doubted that she understood their world and the circles that they moved in. Felicity’s story and Sylvia’s story spoke quietly and clearly about the situation of women of their generation and their class.

Above all though is a wonderful light read, a confection, and it really is such fun.

By the end of summer all of the pieces had fallen into place. It would be fair to say that love had a lot to do with it …..

I am so glad that The Twelfth Hour is in print, because free downloads are wonderful, but Ada Leverson wrote the kind of books that need to sit on bookshelves, and that can make readers smile whenever they catch their eyes.