February 11, 2014 By Fleur in her World in 100 Years of Books, Book Reports, Fictional, it came from the past and pulled me back there Tags: L T Meade 7 Comments

A week of turbulence – at work and in the weather – had me looking for exactly the right bookish escape, and I found exactly the escape I needed in a Victorian school story.

The setting was a generation or so earlier than the earliest schools stories I’ve read, and though there were differences there were many more similarities, making me think that the authors who wrote school stories for my and my mother’s generations probably grew up reading Mrs Meade’s books.

‘A World of Girls’ has two heroines who are quite unalike, and circumstances and the differences in their characters put them at odds. 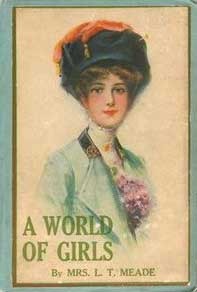 Hettie Thornton was a new arrival, sent to school by her father when her mother died; she was bright, she was thoughtful, but her pride might be her fatal flaw. Annie Forest was a charity girl, and she was warm-hearted, she was sociable, but she had an unfortunate habit of rule-breaking. Both girls were fallible, believable, and utterly engaging.

Others weren’t drawn with quite the same subtlety: Cecil was so very good and understanding; Dora was dreadfully haughty; Susi was ridiculously slothful and insensitive; and Nan was horribly, horribly spoiled. But each had a significant role to play, and the community that L T Meade created really worked.

My sympathies shifted as the story unfolded. It took in  practical jokes, midnight feasts, competition for honours, an adventure with gypsies, and though I had an idea how things would work out I was never sure quite how the story would get there, and I always wanted to keep reading.

It was a little silly at times, but the spirit of the story was always right.

I loved the idea of the big school playroom, with an area of little partitions that older girls who were very good would be given, to decorate as they liked, and to entertain and take tea with their friends.

Over the course of the story I came to love Mrs Willis, the headmistress, just as much as the fifty girls left in her care did. At first I found the Victorian values and the endearments she dished out so very liberally cloying, but as time went on I came to understand that she had a wonderful vocation, that she had good reason to act as a mother to so many of her girls, and that her principles very extremely sound.

And Mrs Willis was fallible too ….

My only disappointment was that the ending was very rushed, and that there was no time for the girls to react to everything that happened.

But there is a sequel.

I’m not going to rush to read it, but one day when the moment for a Victorian school story comes again, I’m sure that I will.