January 25, 2014 By Fleur in her World in Book Reports Tags: Susanna Clarke 6 Comments

The second part of anything that comes in three parts – be it a film, a book or a play – is always the  poor relation of the three.

The first part has the lovely job of introducing the story, the setting and the cast of characters, and of suggesting possibilities and steering a course.

The third part has the glamourous – if tricky – job of bringing together everything that has happened, maybe throwing in a twist or two and bringing things to a close in a fitting manner.

The second part has the hardest and least lauded job, of building on the work done by the first part, and of carrying everything forward and holding the interest, so that the third part can do its job 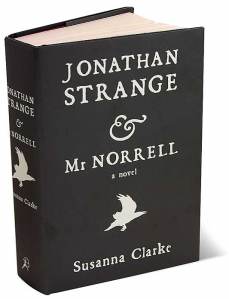 And so second parts are rarely easy to love as what comes before and as what follows, but it is very easy to admire then, and to appreciate what excellent work they do.

That was the case with my reading of the second volume of Jonathan Strange and Mr Norrell.

The focus shifted from Mr Norell, who had been present from the very first chapter of the first volume, to Mr Strange, who was introduced towards the end of that volume. The relationship between the two magicains, the evolution of their relationship, their different attitudes and approaches, and the inevitable parting of the ways was the backbone of the story, and it moved forward beautifully.

The most striking points in the first volume were pieces of magic, but in the second act the finest of the set pieces were the meetings of Mr Strange with real, historical figures. The Duke of Wellington was wonderful, and George III was sublime.

I continued to love everything that I was so smitten with in the first volume. And I began to realise that to build this story must have taken such work and such planning,  as well as the love and imagination that were clear from the very start.

And there was a shock, a change of direction maybe, at the end of this volume …

There is so much more that I want to say, but I’m saving it all for next week, when my first journey through this book will be complete. I say first journey, because I already know that it is a book I will want to read again.

I’ve already begun to read the third volume, and now I really must get back to it …..

Vishy, from Vishy’s Blog, and Delia, from Postcards from Asia are the hosts of this readalong.