January 21, 2014 By Fleur in her World in Knitting Tags: knitting 6 Comments

I set myself a goal, and I’m off to a very good start.

Nice yarn, but it tends to pill, and so I wouldn’t use it to make anything that got significant wear.

(It’s more pink and less mauve than it appears in the pictures.)

I’d made a hat and a pair of mittens and I had enough left for a scarf. Not a long scarf, but something to tuck into a collar on a cold day. 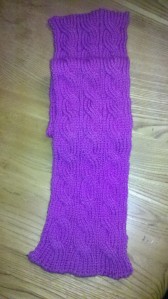 I couldn’t find one I liked that worked with the hat and mittens, and so I made it up, using the cable from the mittens
. It’s worked it rib, and so it’s reversible, which is what I wanted for a scarf.

I cast on enough stiches for three repeats, three stitches in between each cable, and a border at each end. I used the alternate cable cast on.

And then it was just knit one purl on rib, cabling every ten rows. The rows flew by, and it was wonderful television knitting.

I went on until the yarn was pretty much gone and the two ends matched.

The cast off was new to me –  the invisible ribbed cast off  which is something like Kitchener stitch – I went looking for something to match the cast on and this looked to be the best bet.

Now I have to keep the momentum going – watch this space!