January 16, 2014 By Fleur in her World in Book Reports Tags: Helen Dunmore 10 Comments

I so wanted to love ‘The Lie.’  I have loved her writing for years, ever since curiosity led me to pick up a copy of ‘Burning Bright.’  I was captivated by a story that was a little out of the ordinary, and by words that were used so well, to create such vivid images.  I knew then, and the books that followed confirmed, that she was a special author, and author to seek out …..

And I did love ‘The Lie’, but not quite as much as I hoped that I might. 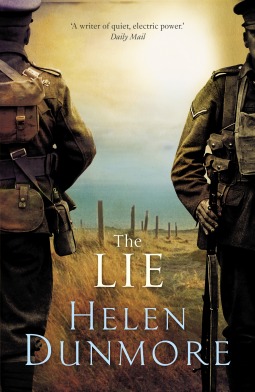 It tells the story of Daniel, who fought in the Great War, who survived, and who came home to his native Cornwall. He is shell-shocked and he is alone. His mother died while he was away and he saw Frederick, the childhood friend who became his commanding officer, die. He has no home, but Mary Pascoe, an elderly recluse, allows him to build a shelter and scratch a living from her land. They understand and help each other.

As he works on the land Daniel’s mind wanders. It takes him back to his childhood, when he was friends with the children from the big house, Frederick and his sister Felicia. His mother was the cleaning lady, but the children didn’t see the class barrier. And it takes him back to the horror of the trenches, where there are ghosts that will not let him go.

Helen Dunmore manages all of this beautifully. The shifts in time are subtle, with each painted differently and yet so clearly by the same hand. And Daniel’s character holds everything together; it is easy to understand why his mind wanders, why he sees Frederick at the foot of his bed, why he is what he is, why he does what he does …..

And the writing, enriched by the poetry that Daniel read in the library of the big house, that he loved, that he learned, is every bit as special as I hoped.

Frederick meets Felicia again; she was a little girl the last time he saw her, but now she is a war widow with a child. They are drawn together, because they are both alone, because they have shared memories, because they both desperately miss Frederick. But they have changed, and life will take them in different direction.

The portrayal of Felicia, shifting from the girl she was to a woman who has learned how she must live is sublime.  Details handled so very, very well. This book is full of such wonderful details, but there were moments when my attention was pulled away.

If you set a story in Cornwall, if you change the names of places, you really shouldn’t use real place names for your characters. If you set out to write a novel set in the aftermath of the Great War, elements often found in gothic novels will seem out of place. Such small things, but they took me away from the heart of the story.

The seeds for the ending were planted early. A misjudgement led to a lie, and that led to tragedy. It was so sad, knowing for so long that an unhappy ending was inevitable, and it was heart-breaking when it happened.

That pulled me right back into the story, and it is still in my head, with none of the things that bothered me seeming to matter any more.