I found this in a bargain bin, I was thrilled to find an out of print book by D E Stevenson, but sadly I was to find that Rochester’s Wife was not D E Stevenson at her best.

The story begins with Doctor Kit Stone has returning to England after four years of travelling the world. As a child he had dreamed of being sailor, but he was the son of a widowed doctor who dreamed of seeing one of his sons take over the family practice. But Kit’s father died before he completed his studies, and so the practice was old instead and the proceeds were divided between his two sons. When he qualified, Kit used his legacy to travel, to see the world. 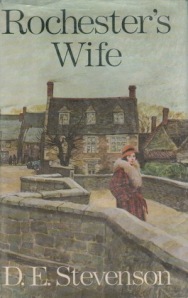 Kit was happy to be back in England, but he didn’t feel ready to settle. He let himself be steered though. Kit’s elder brother, Henry, had used his own legacy to advance his career as a stockbroker. One of his partners, Jack Rochester, lived in a small town, not far from London, and he knew that the town doctor was growing old and in need of support. The suggestion was made, first to the doctor and then to Kit, that he join the town practice.

The old doctor and the young doctor were both wary, but they soon formed an understanding, and Kit moved into the Peabody household. He and the gruff Doctor Peabody enjoyed working together, and it was clear that the elderly doctor was pleased to have another man in the house. He grew fond of the doctor’s young grandson, the charmingly precocious and eminently likeable Jem, whose parents were abroad; a lovely elder-younger brother relationship grew between the two of them. He was less successful with Miss Peabody, Ethel, the doctor’s unmarried and unhappy daughter; but he got on very well with Dolly, the doctor’s recently married daughter, who came home when her husband had to go abroad, as she was expecting her first child.

The potential was there for an interesting story. The characters were likeable – D E Stevenson’s books always suggest to me that she likes people, that she has empathy with all of her characters – and it was lovely to watch Kit settling in, appreciating living in the country, being drawn into the country, practicing his profession …

It seemed that every time a place was mentioned Kit had been there on his travels, and that every time a problem surfaced Kit could call on experiences he’s had abroad. He must have had an extraordinary itinerary; he must have been vigilant, perceptive, and so very receptive … It was highly unlikely, but it would have been forgiveable if the heart of the story had been right.

When Kit met the Rochesters he was smitten with Mrs Rochester, who was beautiful, charming, and quietly compassionate. She was lovely, and it was understandable that Kit fell in love with her. But of course there was an impediment: she had a husband, she loved him, and she was loyal to him. And there was another problem: Mr Rochester was clearly unstable, and his wife was struggling to keep things together. Kit believed him to be insane, Doctor Peabody confirmed his diagnosis, and they had to work out what to do, given that they had not been called on in a professional capacity, given that they did not want Mrs Rochester – Mardie – to be upset.

The way that this story plays out is too melodramatic, interesting characters are side-lined, and, most of all, its presentation of mental illness is not right – even given that times and ideas have changed. I’m inclined to say that this is a classic case of an author picking a subject that doesn’t suit her, and sticking with it regardless.

There are some lovely scenes along the way. It became clear that Mardie cared for Kit as much as he cared for her. Jem – who had a wonderful talent for imitating the people around him – was always a joy. And there was a wonderful trip to Scotland. The story was readable, and was always going to keep reading to find out what happened.

The ending was odd, a strange mix of things that were right and things the were wrong, contrived so that everything could be resolved. The resolution was right but the way it was reached was wrong.

I could say almost the same thing about the book as a whole. There was the potential for a much more interesting story with the characters, and with their circumstances.

And as it stands the story feels unpolished, and it was maddening because with just a little reworking – in particular with the word ‘breakdown’ replacing the word ‘insane’ – I’m sure it could have been so much better.