I was born on the coast, I live on the coast, I am always drawn to images of the coast, of sea and cliffs, and so this book caught my attention straight away. The title was unfamiliar, I had never heard of the author, but as I’d already read and loved one landslide story this year (The Feast by Margaret Kennedy), and as this landslide story was published by the wonderful Valancourt Books, I was full of confidence when I summoned a copy to read. 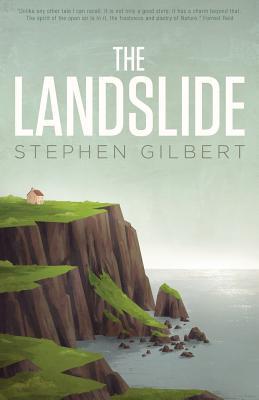 ‘Landslide’ was Stephen Gilbert’s first novel, published in 1943 but set some years earlier, set in a small, rural community on the coast of Ireland. Twelve year-old Wolfe lived with his parents in his grandfather’s house, and he was closer to his grandfather than his parents, who seemed unhappy, maybe with each other or maybe with their situation; and tells his own story, in a voice that is utterly engaging and rings completely true.

That story begins in spring, when, after a week of constant heavy rain, Wolfe woke in the night to hear a loud rumbling and to feel the house shake. He was frightened, he thought that it was the end of the world, but it stopped. And when he woke he learned that there had been a landslide.

Wolfe sets out, with his grandfather, to look at the changes that the landslide has wrought. What they find is extraordinary, not rocks and rubble, but lush new growth, trees and plants; it is as if the landslide has uncovered another world ….

The man and the boy are captivated and excited by what they find; Wolfe’s narrative captures that perfectly, and it is full of wide-eyed wonder and earnest desire to communicate what he has seen.

And then there is something even more wonderful, more fantastical: Two creatures, a dragon and a sea monster, running and playing on the shoreline. They were beautiful, and Wolfe and his grandfather – he called him Gran’papa – were dazzled. They found that there was a whole world, there were other creatures, all buried until the landslide revealed them.

Wolfe’s fearlessness and curiosity was lovely to see and, his grandfather felt the same emotions, tempered by the wisdom that age and experience brings. Together they explored, they found so much, and they learned to communicate with the creatures, and they learned of their history.

A small green creature, very much like a dog, followed Wolfe home. That caused comment in the village, and it provided some wonderfully light moments in a story that would turn darker. The villagers were fearful and they saw something evil, something to blame for bad luck, in what the landslide had uncovered.

The creatures, who had never learned to distrust humans, learned unhappy lessons.

Wolfe and Grand’papa were forced to make difficult choices. The relationship between them – close in spirit but distant in age – made that particularly interesting.

But it seemed the new world was doomed. The story played out to a bittersweet conclusion.

‘The Landslide’ is a wonderfully engaging story, rising in the first act to show what is possible, the potential of the world, and then falling in the second as ….. well, as things fell apart. I loved the rich description and the wonderful discoveries of the first act best; the second half of the story was more profound, but it played out just as I thought it would, it explored the themes I thought it would. It was entirely right, but there were no surprises.

In the end though, that didn’t matter; Wolfe’s testimony was utterly real, and this telling of his wonderful experiences held me from start to finish.