I have to address you, but I must confess that I am very nearly lost for words. I have never met anyone quite like you – in fact or in fiction – and you have made such an impression. You really are a force of nature. You had to be, to have lived the life that you have lived.

Looking back it’s hard to believe that you were the daughter of a self-made man, that you came from Apex in North Carolina. But, of course, you were the apple of your parents’ eyes, and they were prepared to invest everything they had, and to do without themselves, to help you reach the very highest echelons of New York society.

You always got what you wanted. Always. 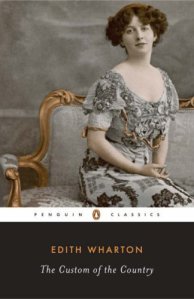 Did you appreciate what they did for you? Did you understand how much they sacrifice? I think not; there was nothing in your words, your actions, your demeanour to suggest that you did.

At first I was inclined to blame your parents for spoiling you, but I came to realise that it wasn’t them, it was you. I began to feel sorry for them.

You made some mistakes as you climbed the ladder, because you didn’t quite understand quite how that rarefied society worked, but you were a wonderfully quick learner. You changed your behaviour, your appearance, your expectations, to become the person you wanted to be, the person you needed to be, to achieve your ambitions.

And you succeeded. You drew the attention of Ralph Marvell, the son of one of the oldest, grandest families in New York. He loved your beauty, your difference; and you loved everything that he stood for. And so you married …..

Sadly, it wasn’t a happy ending.

You didn’t understand that the families at the pinnacle of society were not the wealthiest. You couldn’t understand that Ralph didn’t share your ambitions – I don’t think that you even realised that was possible – and certainly it was quite beyond your comprehension that he dreamed of a writing a novel. He never did, he had not one iota of your drive and ambition, and I suspect that he lacked the talent. Ralph drifted through life, disappointed that he could not expand your narrow horizons, that he could not open your eyes to the beauty of the art and literature that he loved.

He was part of an old order that was dying, and you were part of a new order that would adapt and survive. You learned how to bend and even change society’s rules to allow you to do exactly what you wanted to do. You really didn’t understand him, you broke him, and my heart broke for him.

I even began to feel at little sorry for you, despite your selfishness, because there was so much that you didn’t understand. There are more important things than money, luxury, fashion, and social position. Things can’t really make you happy, because there will always be other things to want, there will always be things beyond your reach. You learned so much, but you never learned that.

There would be more marriages, more travels, more possessions ….

There would be more damage. My heart broke again, for the son you so often seemed to forget you had. And though you would never admit it, you were damaged by your own actions. But you were a survivor Undine, weren’t you?

You did learn a little;  I learned a little about your past, and I came to feel that I understood you a little better; most of all,  I do think that when you finally married the right man it made all the difference. It wasn’t quite enough for me to say that I liked you, but I was always fascinated by you.

Now I find myself wanting to do what Alice did at the end of ‘Alice’s Adventures in Wonderland. I want to throw you in the air and say, “You’re just a fictional character!” But I can’t. Because you are so utterly real; not a heroine, not a villainess, but a vivid, three-dimensional human being, with strengths and weaknesses.

You are perfectly realised; your world and everything, everything around you is perfectly realised. The telling of your story is compelling, beautiful and so very profound. It speaks of its times and it has things to say that are timeless. Because, though times may change, human nature stays the same.

Edith Wharton was a genius – it’s as simple as that.