This weekend we will be having  the eighth anniversary of the day that I adopted Jane and Mother. I wrote about that day on my anniversary a couple of years ago. And I wrote about Pip, who was dog of the house here before me on her anniversary. But there is one more story to tell, of what happened before that and lead to my human family and border terriers being linked. And I thought that it was about time I told you that story.

It began a long time ago, in 1940, in a house on the promenade. Not my house, but another house just a few doors away. A lady called Daisy lived there with her husband James, who was the headmaster of the art school just up the road. They had two grown up sons, who had gone to fight in the war, and they had a little girl who was still at home with them.

One day Daisy sent her little girl to fetch her father from the studio to have his dinner. But she found her father on the floor, and she couldn’t wake him up. James had died, quite unexpectedly, of a heart attack.

Daisy was heart-broken, but she knew she had to carry on. She had to look after her little girl, and she had to be there when her sons came home. She prayed that they would come home.

It was lucky that Daisy had some savings, because she had never had to earn her own living. She was a sensible practical woman, and she had the bright idea of becoming a landlady, renting out some of the rooms in her big house.

A lady called Babs rented one of the rooms. Babs lived in the Home Counties, but she moved to Cornwall to be a co-ordinator of land girls. She and Daisy became very good friends, and Babs lsoon came to love Cornwall. When the war ended and Daisy’s sons came home – they both survived, but they were both changed – Babs decided to buy a house of her own in Penzance; she found a nice little house, with a garden, very close to the park. And she decided that she would have a dog. The kind of dog that one of her good friends bred up in the home counties, the kind of dog she had herself before the war.

Jimmy came to live with Babs, and he soon made friends with Daisy and her little girl. Daisy’s little girl loved dogs, and she had some lovely times, taking Jimmy out and playing with him. She kept in touch with Babs after her mother died, when she was grown up and had a little girl and a little boy of her own. They met for coffee every week in the town.

Jane remembers the dogs, she remembers that she and her brother had a toasted teacake to share when Mother and Babs met for coffee, and she still has some nice editions of classic children’s books that were presents from Babs.

We have pictures of some of Babs’ border terriers: 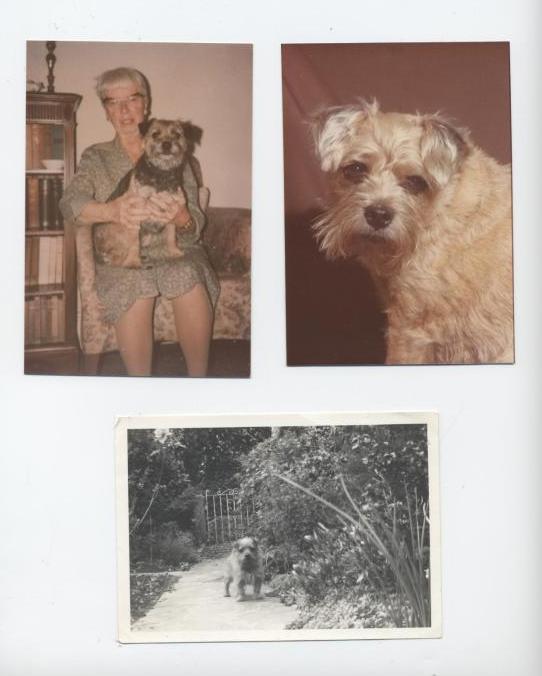 The first picture is Babs at home with her last dog, Cara.

The next picture is Muffin, who had a proper studio photograph taken.

And at the bottom is Robin, in Babs’ garden.

I wrote that Cara was Babs’ last dog, but actually that isn’t quite true.

Babs was a very sensible lady, and when she was having trouble managing in her own home she made arrangements to move to a nice care home where she could be looked after. She couldn’t take a dog, but luckily she had a very good idea. She knew that Mother was about to retire, she knew that mother loved dogs, and so she asked if she could ask her old friend, the breeder, to send mother a border terrier as a retirement gift!

Mother said yes – she was thrilled!

That was how Pip came to live with my human family. Mother took Pip to see Babs every week, until she died, and they got on very, very well.

And now, of course, I go to see Mother every week in her nursing home.

I’ll be back with another one on Christmas eve, because that’s when Jane and I are planning to  open our Virago Secret Santa gifts.

And I expect that Jane will be back before that, to tell you about books.