When I was writing The Goddess and the Thief, a novel set in England and India, in the middle of the nineteenth century, I had lots of research to do. I knew very little at all about that more distant exotic world, or the lives of the English living there: the soldiers who fought for Empire, or those who became ‘politicals’ when helping to rule over annexed states conquered by the British Empire. I knew nothing of the lives of the women who travelled to be at their husbands’ sides, who then faced the perils of heat and dust, of insects, disease – and loneliness.

I began by reading factual books and was gripped by the histories to be found in the works of Charles Allen and William Dalrymple, Richard Holmes, David Gilmour and Margaret MacMillan. I realised that in ‘the truth’ lie the seeds of many fictional worlds. And in ‘Tracing your British Indian Ancestors: A Guide for Family Historians’ written by Emma Jolly, I came across the story of a house situated in the hills where the gate posts were very clearly scarred by the claws of the tiger which passed every morning – and where it always paused to scratch. That memory, that one small reference, affected me so deeply that I simply had to include such a beast in the pages of my book, although my tiger does go on to do more than merely scratch its claws! 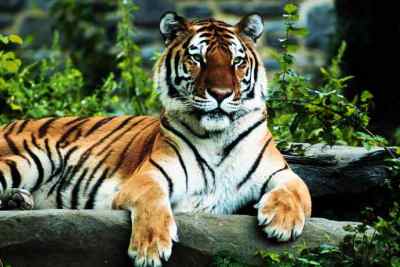 Another factual reference that had a very dramatic affect and was, to a certain degree, included in my fictional world, was the memory of a child who had been born in India where she had then been cared for by a much beloved ayah, until such time as her parents decided to return to live in England. The ayah, who had given her life to the service of this family, presumed that she would be taken along, even accompanying them to the docks. But, at the point of boarding ship, the father took that woman aside and forced a large envelope into her hand – a sudden goodbye, with his conscience allayed by whatever that envelope contained. It was heartbreaking to read about the way the child watched from the deck above as the nanny stared back up at her – when she lifted high that envelope, tore it up into little pieces and then threw the debris down into the sea.

What a powerful show of contempt that was. What a desperate scene of cruelty, and heartbreak, and bitter loss – yet more so to know that it had occurred: a gift to a writer such as myself. 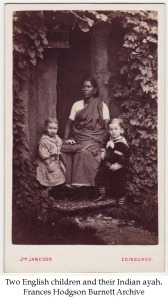 Other ‘gifts’ were to be found in the fictions set in India. I relished anew the vivid tales created by Kipling, and Forster. I thrilled to the adventures in M.M.Kayes’ The Shadow of The Moon, or The Far Pavilions. The characters of Frances Hodgson Burnett in her children’s classics The Secret Garden, and also A Little Princess took on quite a new significance when I was trying to understand how difficult it must have been for a child to be dragged from its ‘homeland’ – from everything it had ever known – and then expected to start anew in a culture entirely different.

But perhaps most influential of all was The Moonstone by Wilkie Collins – a novel set mainly in England, but one which exudes all the mystery surrounding a sacred Indian stone that was plundered from the Punjab and then gifted to Queen Victoria – the very same Koh-i-noor diamond described in my own novel.

Though my story is quite different, it does reflect the diamond’s ‘power’ and how those from its Indian homeland long for it to be returned – for religious, personal, or political ends. The Moonstone is all the more powerful for the show of its mannered Victorian world which is seething below the surface with sexual passions and addictions to drugs – and the question of what is and what is not real, where ‘the supernatural’ may be at play as much as delusions of the brain.

I thrilled to the opening and closing scenes where India is brought to life, with such vivid colours and music and smells, when we see priests and temples with Hindu gods – where we wonder at the depravities and also the glamour of other world – immersed in alien faiths and lives where stories of death and destiny may still have a relevance today.

After a career in publishing, and then in the world of art and design, Essie Fox now writes Victorian novels published by Orion Books. The Somnambulist was shortlisted for Best Debut Novel 2102 at the National Book Awards and has been optioned for TV/film by Hat Trick Productions. This was followed by Elijah’s Mermaid – and her latest novel, The Goddess and The Thief was published in December 2013.

For more information about her books, please see: www.essiefox.com

For visual inspiration, Essie Fox also has a Pinterest page devoted to each of her books. http://www.pinterest.com/essiefoxauthor/