Jennifer Dawson is one of those rare authors who has had both old work and new work published in Virago green. Her 1961, James Tait Black prize-winning, debut novel, ‘The Ha Ha’ was revived as a Virago Modern Classic, and two later novels, ‘Judasland’ and ‘The Upstairs People were published as Virago New Fiction in the 1980s.

I spotted ‘The Upstairs People’ in a charity shop because the spine was a very familiar shade of green, a shade that always, always catches my eye. The author’s name was familiar, the words printed on the back cover were intriguing, and so I brought the book home. And now I am very glad I did, because it is a little gem.

It tells the story of Cossey, a mother who is so eager to please her children, so eager to teach them, so eager that they will not suffer as she did.

“Ransome Street ran off Ransome’s Fields at a right angle, and when we asked Cossey, our mother, what Ransome meant, she said: ‘Something like this,’ and jumped up and down violently on the bed and laughed and bounced more. Our mother loved violent motion. She said her parents had never given her any love when she was a child, and when a fair came to Ransome’s Fields she was always first on the Big Dipper and the Chairoplanes, and was tipped upside-down laughing. She had a taste for it and was never as sick as we children were …”

Her story is told by her middle child, Alma, and her childish perspective, her clear-sightedness, suits that story perfectly. 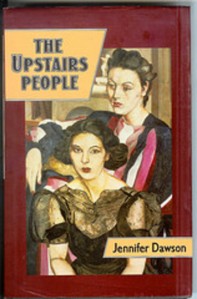 She recalls Cossey’s stories, stories of her strict upbringing and of the coming of the Great War, picking out such telling details and painting in such vivid colours, making them utterly compelling. And she recalls the life that the led, in London, between the wars.

But maybe she tried too hard; maybe she was too single-minded.

One child tried pulled too hard and one clung too hard. They were both punished, and it was the middle child, the child who had the wisdom to simply watch and listen, who prevailed.

This is a very dark story, and a very difficult story to try to explain.

But what makes the story sing is the quality of the writing. Jennifer Dawson had an idiosyncratic way with worlds, a distinctive view of the world, and it suited this story perfectly.

And along the way Jennifer Dawson made me think of a number of other Virago authors: Molly Keane, Ursula Holden, and, most of all,  Barbara Comyns.  A distinguished company, but this book alone has me thinking that Jennifer Dawson belongs there.