October 17, 2013 By Fleur in her World in Book Reports, Fictional, it holds stories of the past Tags: Emma Carroll 9 Comments 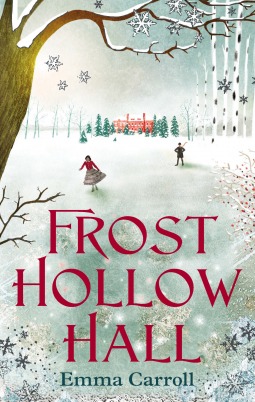 I don’t often read books written for younger readers, but there was something about Frost Hollow Hall: an interesting title, a lovely cover, and the promise of a Victorian ghost story. I had to open its pages, of course I did.

Inside those pages I met a engaging heroine, a feisty and compassionate girl named Tilly. A girl from a working class family who lived in a village close to Frost Hollow Hall. When Will, the butcher’s boy, dared Tilly to go skating on the ice at Frost Hallow Hall she was anxious. The great house had been in mourning ever since the young heir, Kit Barrington, had drowned in its lake some ten years earlier, and there was talk in the village of ghosts and strange goings on. But Tilly wasn’t going to let know that she was worried, and she skated right out to the middle of the lake.

The ice cracked, and Tilly was pulled down into the icy waters. She should have drowned, but she didn’t. Because an angel, the most beautiful, the most magical, thing that Tilly had ever seen, caught her and pushed her up out of the water.

It was such a lovely opening, and I was completely captivated.

Tilly saw the angel again, in her dreams. She realised that there was something he wanted; he wanted her to go to Frost Hollow Hall, and to make the reveal the truth of what had happened there ten years earlier.

There was a vacancy for a parlour maid, at Frost Hollow Hall, and, though Tilly had no experience and didn’t make the best first impression, she got the job. She was in the right place at the right time, and it seemed that the hall had trouble holding on to staff. Because the village gossip was right: there were ghosts, there were strange goings-on.

Tilly’s adventures at Frost Hollow Hall are very cleverly plotted, with plenty of twists and turns, with some wonderfully dramatic moments, and a lovely selection of those familiar elements that you so often find in ghost stories. Meanwhile Tilly’s mother has problems, and of course her daughter wants to support her; and Tilly’s relationship with Will – who delivers meat to the hall –  moves along nicely. All of the elements work together very well.

Frost Hollow Hall is more than a ghost story; it’s a story that lives and breathes, and paint wonderful pictures, and it’s a story about love, family, loss, regret, and learning to let go, told beautifully, with both subtlety and charm.

The narrative voice was wonderful, the lovely descriptive prose evoked the time and the place perfectly, and Tilly was so very engaging that I was completely caught up with her, from the first page to the last.

It was only the ending that hit a slightly wrong note; I wasn’t unhappy with  the way the story played out, and I appreciated that every detail was attended to.  But it felt a little rushed, and some of the emotional shifts happened rather too quickly.

But the book as a whole I loved. It’s a story for children, built on classic lines, and it would sit nicely in a line of books with names that are so familiar; books that continue to be read, and loved, even though their own era is long gone.