October 15, 2013 By Fleur in her World in Book Reports, Fictional, it holds stories of the past, Reading the 20th Century Tags: Jean M Auel 6 Comments

I first read The Clan of the Cave Bear when I was in my late teens. My mother read it, she told me it was one on the best things she had ever read, and insisted that I should read it too. She always was a passionate advocate for books she loved, and she was always ready to lend a copy of a beloved book to anyone who she thought might possibly like it. Whether they wanted to or not! 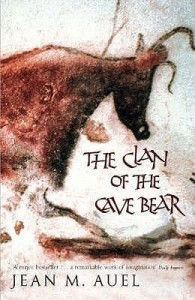 It took a few attempts before I read the whole book, but eventually something clicked and I did finish the book. And the next in the series, and the one after that, and the one after that …. But gradually the love I had at first faded away, and in the end I accepted that the author’s vision for her series was not what I had hoped it would be. I gave up, before the final book.

But I still had the first few books on the shelf. Some that my mother had bought, and some that I bought for her to borrow sometime later. I remember my father saying to me, a little while before the last Christmas before he died, that he was hoping the next book in the series would be out in time for him to buy it for my mother, because he knew she would love it. It didn’t, but that conversation stuck in my mind, and I sent my mother a copy on his behalf as soon as it was published, quite a few years later.

And so I have a stronger emotional attachment to this series of books than I have to many finer works.

I hadn’t thought to re-read any of them. But now my mother is in a nursing home and, though she lacks the concentration and the short-term memory to read very much at all, she still wants to know what I am reading, and she still remembers small details from years ago. It occured to me that maybe she would enjoy talking about The Clan of the Cave Bear, and she would certainly be pleased to know that I was reading one of her favourites. And so maybe I should read it, and drop it into my century of books.

At this point I should say thay I can’t talk about my thoughts as I re-read this book, or my feelings at the way that the series developed without venturing into territory that you might consider to spoil story lines if you don’t know the series already and plan to read it one day. So, if that is the case, you might want to look away now. 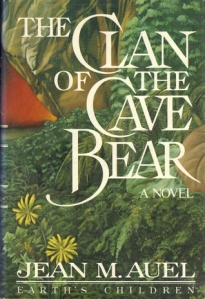 Somewhere around thirty-five thousand years ago, Ayla, a five-year old Cro- Magnum girl, found herself completely alone when her family, and all of her people, were killed. She wandered, lost and alone, until she was discovered by a group who call themselves the Clan of the Cave Bear. They were a different race –  Neanderthals – and only one of their number, Iza, a medicine woman saw the child, who looked so very, very different from her people, as a fellow creature to be helped and nurtured.

Iza – helped by luck, or maybe by fate – was able to have Ayla accepted by her clan, and she raised her as her own child. But Nethanderals and Cro-Magnums were so very different. They had different physiques and abilities; and, they had different approached to life. The Nethanderals inherited the memories of their forebearers, so that they need not learn but could be guided by tradition and past experiences, wheras Cro-Magnums had no such inheritance, but they had the ability to reason and learn, and that meant that they were far better equipped to survive into the future.

And so Ayla’s upbringing pulled her one way was but her instincts pulled her in another, and that other way was so often contrary to clan tradition and ways. That led to conflict. And it is that conflict that drives the narrative,with tension growing and falling away time and again, until it reaches a conclusion that is both dramatic and inevitable.

It’s really a simple story. But it was rich with detail, it was simple, it was clear, and though there was repetition, there was enough variation as Ayla grew up,  as the seasons changed, as the years passed to hold the attention. I was fascinted as I read about daily life, hunts, rituals,  rites of passage, even a gathering of the clans. There was so much detail, I realised that there must have been so much research and yet it never seemed too much.

That’s not to say that there weren’t niggles. the one that sticks in my mind is that I didn’t like that way some things were labelled; things like a reference to Iza’s brother, Creb, having’ rheumatism’  when a term like ‘an aching in his bones’ would have felt so much more natural. 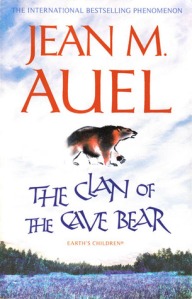 The Clan of the Cave Bear, and their world were perfectly realised. At least at first. I loved the picture that Jean M Auel painted of a society built on experience and firmly rooted in history and tradition. I loved that everyone had a role, that it was recognised that the cycle of life, wrought change, that it was understood that there was a fundamental difference between men and women, that they had different strengths and weaknesses, and  that together they made a community.

But the downfall of this book is that the author compromised her wonderful creation to tell the story that she wanted to tell. She made women subservient to men, in a way that was impractical and inexplicable. She failed to properly balance the conflict between instinct and upbringing in Ayla. And she created a character, Broud, as Ayla’s nemesis, who I don’t believe could have grown into the man he became as a man of the clan. All of that gave the story wonderful drama, but I can’t help feeling that there was a better, more subtle, direction that could have produced the same end result.

I saw early signs too,  of what would become a fatal flaw later in the series: from the moment she evaded a cave lion as an small child, Ayla was a little too bright, a little too capable, a little to able to deduce, create and invent. This time around I found that I could sometimes sympathise but I could hardly ever empathise.

But for all of that I could still say that The Clan of the Cave Bear was a fine historical entertainment, full of dramatic set pieces, and yet rooted in family and community; an extraordinary work of imagination and research. I could, but, because I have read more of the series re-reading, this book has left me disappointed nit just that the series didn’t develop as I’d hoped, but that promises made in this book were broken.

There were so many, so many, signs that Ayla’s coming to the clan was important and meaningful, and that the birth of her son Durc was hugely significant, that he would have a key role to play. But the series went on and the story didn’t ever come back to them.

At the end of the fifth book – which my mother enjoyed and I thought was  weak – we agreed that the story hadn’t progresses, and that there were an awful lot of looses ends to be tied up in the sixth and final book. But they weren’t and I read so many disappointed reactions to that book that I don’t want to read it. The author’s vision and mine were very different, and I have to accept that.

Rereading The Clan of the Cave Bear was wonderfully nostalgic, for me and for my mother, but it also made me realise that its time to let go. I won’t be picking up this book again, or re-reading the rest of the series …