October 14, 2013 By Fleur in her World in Book Reports, Fictional, it holds stories of the past, it took me on a journey Tags: Wendy Wallace 9 Comments

Three women travelled from Victorian London to Egypt, and all of their lives were changed as a result of the journey, the country, and their experiences.

Harriet Heron was twenty-three years old, and she was an invalid, afflicted by asthma in its severest form. Her great love was Egypt, discovered and explored through books, and she longed to go there, but she knew her anxious, protective parents would not countenance the idea. She knew that they loved her, but she was beginning to find their love stifling. And so she spoke to her doctor, who agreed that the change in climate could only be beneficial to her health, and between them they persuaded her parents that a trip to Egypt, a change of climate could only be good for Harriet’s health. 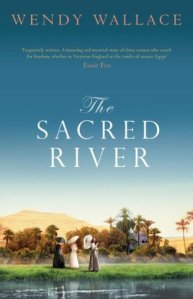 Harriet was thrilled that she could finally escape the confines of her life in London and see the world. Louisa, her mother, was anxious, but her love for her daughter compelled her to you. And because Harriet’s father could not leave his responsibilities in London behind, he asked his spinster sister, Yael, to accompany his wife and daughter.

Egypt was everything that Harriet had hoped, and more. Her health improved, and she took bold steps towards a new life of her own. Louisa feared for her, and her fears grew when she encountered a man who knew about her past, her life before she was married, because she knew that both she and her daughter could be badly hurt.

Meanwhile Yael, a devout Christian, found a cause that gave her a sense of purpose that she realised had been missing from her life. She was shocked by the poverty, the poor sanitation, and the lack of health care for to the city’s children and she made plans to start a clinic to support and educate their mothers. But she was shocked again when people she was sure would be supportive were anything but.

It was lovely to watch the three different women, and to see their stories unfold. Harriet was a wonderful character and was thrilled to see she her blossom as she stepped forward as a grown-up woman. There were moments when I thought her a little selfish, but I could understand why, and I never doubted that she loved her mother and her aunt. I sympathised and empathised with Louisa, as the story of her past, and the very real threat to her family’s happiness, slowly became clear. But I think that most of all I loved Yael; her desire to make a difference, her willingness to do whatever it took, and her refusal to take no for an answer. She, like her niece, blossomed when she found a sense of purpose that had been missing from her constrained London life.

Wendy Wallace’s wonderful writing made all of their stories sing. It was light, elegant, and so wonderfully evocative. Egypt lived and breathed. I never for a moment doubted that she loved and knew the country – and everything she wrote about – just as well as Harriet. there was so much to take in.

I was just a little disappointed that there wasn’t quite enough space in a single novel to develop the stories and characters of the three protagonists quite as much as I would have liked. The telling of all of their stories was slightly episodic, and that made them a little less effective than they might have been.

That leaves me inclined to say that Wendy Wallace’s first novel – ‘The Painted Bridge’ – which focused on one woman’s story, was a stronger novel. But I appreciate that she has done something a little different with her second novel, that she is still writing about the constraints on women in Victorian society, and the potential that those women had. And there was so much that I enjoyed about ‘The Sacred River’ that I already wondering what she might do in her next book…