I never could resist and A to Z and this one comes from  Jamie at the Perpetual Page Turner, though I found it on a Geranium Cat’s Bookshelf. 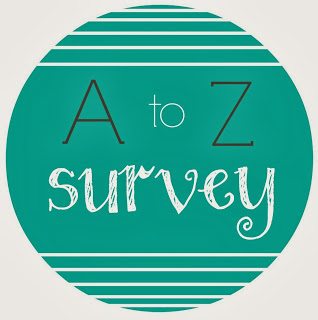 Author I’ve Read The Most Books From: Agatha Christie. I remember back in the day when I kept my reading records in card indexes (sad, I know) most authors had one card, a few had two, and only Agatha had three.

Best Sequel Ever: It might not be a sequel in the strictest sense of the word, but I can’t think beyond ‘Paradise Creek’ by Leo Walmsley. It’s set in the same place as ‘Love in the Sun’ some years later, when much has changed, and it echoes the first book beautifully.

Currently Reading: ‘Through The Magic Door’ by Arthur Conan-Doyle, for my Century of Books, and ‘A Very British Murder’ by Lucy Worsley.’

E-Reader or Physical Book: I will always aspire to own books I want to keep in physical form, but I do find an e-reader useful to carry with me, safe in the knowledge that I have a choice of book when I have moments for reading.

Fictional Character You Probably Would Have Dated in High School: One of the Castellacks of Penmarric – who would have lived just a few miles away from me. Probably Phillip, though I have a soft spot for Jan-Yves …

Glad You Gave This Book A Chance: I don’t often enjoy books about magical creatures, but I made an exception for ‘The Golem and the Djinni’ by Helene Wecker, and I loved it.

Hidden Gem Book: ‘ The City of Beautiful Nonsense’ by E Temple Thurston, a wonderful bittersweet romance. I found it thanks to Rumer Godden, who wrote in introduction that she fell in love with it when she was young, that it inspired her to go to Venice and to write about Venice, and when I tracked down and read my copy I understood why.

Important Moment in Your Reading Life: Opening a LibraryThing account, and discovering that there were far more bookish kindred spiris and bookish possibilities than I had ever thought possible.

Kind of Books I Won’t Read: I find it difficult to rule out an entire class of books, but I really don’t like crime noir, erotica, or misery memoirs,

Longest Book I’ve Read: A Suitable Boy by Vikram Seth which, according to LibraryThing, comes in at 1504 pages..

Major Book Hangover Because: There really aren’t enough reading hours in one lifetime to read all the books I’d like to read,

Number of Bookcases I own: I can count six actual bookcases, I have some built in shelves in an alcove, a couple of random shelves that I’ve hijacked, and I’m not going to count the piles of unshelved books.

One Book I have Read Multiple Times: I inherited my mother’s copy of ‘Little Women’ by Louisa May Alcott, and between us we have read it so many times that it’s fallen to pieces.

Preferred Place to Read: On a park bench in good weather; otherwise in bed.

Quote That Inspires You/Gives You All the Feels From a Book You’ve Read: The lovely opening of ‘Mariana’ by Monica Dickens – “Mary sometimes heard people say: ‘I can’t bear to be alone.” She could never understand this. All her life she had needed the benison of occasional solitude, and she needed it now more than ever. If she could not be with the man she loved, then she would rather be by herself.”  – reassured me that I was in safe hands.

Reading Regret: That I can’t send a message back through time to my grandmother, to ask her to save the books she read in the twenties and thirties for me. Everything I know about her taste tells me that we had similar taste, and I’m sure she must have read many of the unobtainable old books on my wishlist.

Series You Started and Need To Finish (All the books are out in the series): I really can’t think of one – I’m not a lover of series books these days.

Three of Your All-Time Favourite Books: That’s a ridiculously small number to pull out, but here are three that I have yet to mention: Nights at the Circus by Angela Carter, The Age of Innocence by Edith Wharton and A Pin to See the Peepshow by F Tennyson.

Unapologetic Fangirl For: Lesser known relations of successful authors. Angela Du Maurier and Jon Godden weren’t in the same league as their sisters, but both should be better known than they are. And I have high hopes for Julia Birley – daughter of the wonderful Margaret Kennedy.

Very Excited For This Release More Than All The Others: I try not to look too far into the future, and to focus on the books I have already, but I spotted Alice Hoffman’s ‘The Museum of Extraordinary Things’ and I so want to read it.

Worst Bookish Habit: Picking up books and starting to read without even pausing to think that I have a ridiculous number in progress already..

X Marks The Spot: Start at the Top Left of Your Shelf and pick the 27th Book: ‘Carnevale’ by M R Lovric.

ZZZ-Snatcher Book- Book That Kept You Up WAY Too Late: That would be ‘Penmarric’ by Susan Howatch.  Never have I read a book the size of a housebrick in such a short space of time.