September 19, 2013 By Fleur in her World in Book Reports, Fictional, it came from the past and pulled me back there, it has intrigue, mystery and suspense Tags: Mary Stewart 11 Comments 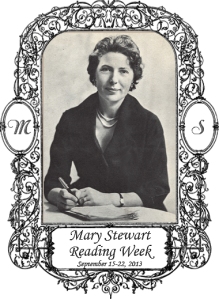 I have travelled to Greece by book, and I have been on a grand adventure with a lovely heroine, to celebrate Mary Stewart Reading Week.

The story began with a young woman, Camilla Haven, sitting outside a café in Athens, writing a letter to a friend. She had come on holiday alone, after parting company with her fiancé and after the friend who was going to accompany her had an accident, and though she was proud of herself for striking out alone she was a little bored. “Nothing ever happens to me,” she wrote.

But something was about to happen. Of course it was!

In an extraordinary case of mistaken identity Camilla found herself in possession of keys to a car to be delivered to “Monsieur Simon” in Delphi. It was, the deliverer of the keys told her before beating a rapid retreat, “a matter of life and death.” Camilla had no idea where to return the keys, she was intriguded, she was concerned, and she had planned to visit Delphi; and so she decided that she would deliver the car.

The narrow twisting roads, and the local drivers, weren’t at all what she was used to, and along the way she found herself needing to be rescued. She was saved by an English schoolteacher. A man named Simon. He knew nothing about the hire car, and he didn’t think he was the man Camilla was looking for, but he was travelling to Delphi too, and so they joined forces. And they got on very well.

Simon had come to Greece to find out more about his brother, Michael, who had worked for the British intelligence service during the war had been posted to Greece to help local resistance groups during the German occupation. Michael had died in Greece, and fourteen years later, when his father died, Simon found Michael’s last letter home. And he realised that the tone of the letter and the story that he had been told about his brother’s death didn’t match. He had come to Greece to find out, to try to reconcile the two.

And that, of course, was the beginning of a wonderful mystery, that was all the more wonderful because it was so firmly rooted in the war, in Greek history and culture.

It took a little time for the story to capture me. At first it seemed a little too “typically Mary Stewart”, the car trip went on just a little too long, and I didn’t like the crisis that brought Camilla and Simon together perpetuated the stereotype that women drivers can’t reverse.

But I liked Camilla from the start, and it was lovely to watch her finding her feet and gaining in confidence as she coped with all kinds of things. And I liked Simon, who treated her with courtesy and respect, and whose faith in her was wonderful. Their dialogues were lovely, they read so naturally, and I enjoyed watching their relationship grow. That relationship might have been a nicely understated romance, or it might have been a firm new friendship between two people who had a space in their life that needed filling. I was so pleased that, even at the end, Mary Stewart didn’t offer a definitive answer to that particular question.

But it is the setting, so vividly evoked and so beautifully described, that made this story sing. I never doubted that Mary Stewart knew and loved Greece and everything about it. All of her books that I have read bring their settings to life, but none of them prepared me for the wonderful richness and depth that I would find in “My Cousin Michael.”

The plot built, slowly and steadily to a dramatic ending. It balanced a natural progression with some unexpected developments so very well. And in the final pages the evil of the villain and the perilous situation that Camilla found herself in were horribly, horribly real. My heart was in my mouth.

I’m sure I could pick out little faults if I wanted to. Contrivances, coincidences, that kind of thing. But I don’t want to, because when the story caught me I stayed caught – hook, line and sinker – to the very end. Mary Stewart does what she does very, very well in this book. I don’t particularly like the description “romantic suspense, ” but it does fit, and I can’t think of a better one.

I think this might be my favourite of her books that I’ve read, and now I am eager to read the two other novels she set in Greece.